Hello guys, I’ve made this thread for anyone who’s a major EFT enthusiast/player like I am. It is an excellent game in terms of depth and realism imo. Anyone else here enjoy EFT as much as I do? I’d like to hear anything about you, like your strats, favorite gun setups, etc.

(also please use this as a megathread for future EFT discussion)

I’ve been meaning to get it for a while now but I’ve essentially called it off until Steam release. Looks like a great game, but I feel it’s a bit small mapwise from recent gameplay I’ve seen.

Escape from tarkov is very good. The only problem is the network and latency issues

This is the only “Gaming Category” post i’ve seen in SOOOOOO long!

Plus, I’ve seen a bunch of videos about the game (Youtuber: CaRtOoNz) but I still don’t understand what you’re supposed to do besides kill people, get their loot, and go to extraction to leave the map

That’s what your supposed to do. Also there are missions you have to complete, which you can fail if you get killed. TheDevilDogGamer is a good YouTuber for tarkov.

Yes, I know, that’s why I made this

The gameplay revolves around going on “raids”, basically expeditions into the conflict zone. You have to extract successfully in order to save your gear and found loot, unless you have it insured. You are playing against other players, up to 30 at a time depending on the map, as well as AI scavengers, aka “scavs”. Some of the maps are pretty big, but one of the most popular is Factory, a close quarters fully indoor map.

There’s an entire world outside of the raids as well, with a marketplace, NPC traders which change and get influenced by players live, and a whole bunch of other meta stuff like skills, weapon modification, etc.

Its main problem is the netcode and latency, which hopefully get fixed soon. Sometimes it is unbearable to play.

Yeah, that and optimization pretty much.

That said, for a Unity game, EFT has amazing graphics. Battlestate really knows how to use the engine.

Only 4 of about 15 10 maps have been implemented, and apparently in the future virtually all of them will be interconnected.

Also if you’ve seen maps like shoreline and customs, they’re already pretty decently big and are going to be expanded later on as well.

Oh neat never realized that’s what they were planning

Even on the map selection menu it shows the Tarkov area as a whole, you can actually see the other future locations on the map. 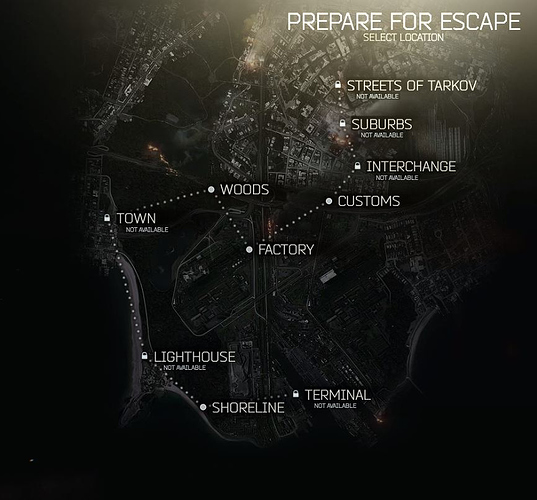 I hear they’ve also added Interchange from the above regional map as an actual playable area now.

In addition they released a devblog about how they record and produce sounds for the game, which blew my mind immersion-wise:

All the way down to the intricate details like the shifting sounds of gear as you turn or ADS. Brilliant.

I heard optimization is bad. Like bringing my i7 to its knees like PUBG does, is that true?

The optimization currently is indeed bad, but they’re fully aware and working on it.

I mean, based on the graphics and physics and all that, it’s rightfully so.

Neat. Now if only I had money because selling my mythicals and buying PUBG was a good idea

The new update is bringing some of that. Even before fixes. Praise Russians.

Pubg cosmetics are worth more than your mythical and sell faster.

I’ve already made ~$20 off PUBG crates via purchasing them with BP. When a new case comes out, grind for BP. It’s so worth it.