i dropped most of this suggestion in an email already but since then i have come up with more related to the suggestion, didn’t feel like dropping another email about it and figured it would be best to see if others had reasonable additions to it

long and short of this is that more options for zombie types in the level editor would be immensely helpful. to clarify, i mean being able to customize PER type/individual table, not as a global setting like in difficulty GUIDs or per nav meshes. any new features in the suggestion (like movement speed) that are not already apart of GUIDs however should be allowed in difficulty GUID configs.

anyway if anyone else has ideas drop em but just keep in mind what’s reasonably possible and what isn’t for nelson to implement, i know some of what i’ve already suggested here is time consuming in nature to implement

This is already an option? Unless I’m misreading the post, idk if table is meant to refer to zombie types on the map. 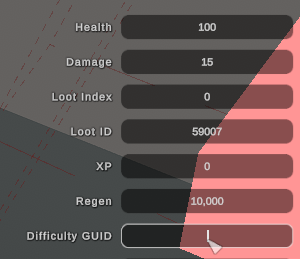 Tables does refer to zombie types on the map. Per-table options would allow greater fine tuning of zombie types over the more global in nature difficulty GUIDs.

So basically it’s mostly not adding new features, just adding new ways to use them that are more flexible.

edited for a bit more clarity

Difficulty guids can be specified per table