Currently we have some flares to lighten and fend off zombies, but I think the flare gun could be an option for that. 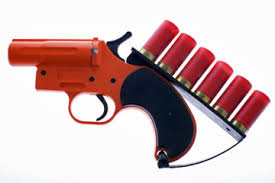 It can be found in boats, shops and campgrounds.

utility:
Shooting in up, generates a light that stays about 10 seconds in the air, thus revealing locations.

Near cities the light in the sky attracts almost all the zombies of the city to her, but if it is fired in the middle of the city will attract the zombies to the player.

Combat in combat is not very useful but can do considerable damage, maybe take 15 or 25% of life but it has to be more worked on in that aspect.

Shooting with it in gasoline or something else flammable begins a fire, and in some cases can also decimate an zombie on fire.

I’m more in favour of a metal flare gun just so I can shoot shotgun shells out of it.

I think you need to go watch a different video.

in mother russia we scream to signal the location were at

Flare gun might be a thing that would be considered already so I’m sure the properties you listed would happen.

I have no real objections to a flare gun being added. Though I do feel like it has a good chance of not actually being all that useful in practice.