Follow up on my generated guns concept for unturned II 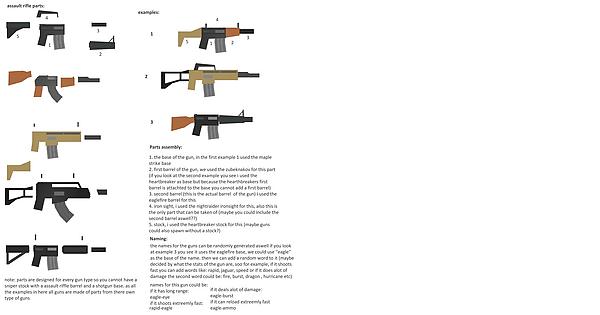 I came up with a Concept for unturned 4.x: randomly generated guns (inspired by Borderlands)

the idea is like this, Every gun is made out of 5 (or less parts), these parts cant be taken of or adapted (like attachments) all the parts together are the gun. the gun starts out with a base and gets build around it. stats are based on what kind of parts the gun has. lets say you get ‘‘eagle’’ a base, lets say it has 100 range 20 damage 30 fire rate 40 recoil etc (these stats are pretty random) you could say the stock adds -10 recoil and +20 range and the barrel +10 damage and +40 range. (you also could assign the gun fully random stats only based on what rarity the gun has) the name of the gun is decided on the base +a a random word. so for example the base is called timber and the added word could be wolf or snake or dragon, you name it. then the gun would be called timber-dragon or timberwolf or thunder-snake. the gun could have camo aswell. i think a cool adition to that could be that the camo is based on the rarity of the gun. a common gun normaly has a pretty lame black or wooden collor but if you find a epic skin there could be a chance it has a woodland camo or a desert collor (no flashy neon collors though)

here is a little (shitty) example of how you can imagine it!

Im really curious what you guys think of this idea! cheers!

Why the fuck have you done this?

No, really, you have already done post similar to this a day ago.

Really cool, also the assembled guns don’t look bad at all. If I can suggest a thing, then you should add the entire description thats in that pic here into the forum, instead of making people have to click it to read. It can be annoying for someone.
Here a few examples of what I mean and of which effects a post like this could have on people imo:

You enter the post, there’s a small pic you can’t really understand what’s about, no description, meh

You enter the post, quick see the pic, read the description below and then open the picture to see better

There’s no way this will work at this level of cross-mixing components given the UII modification system currently. Sights and stock are barely tolerable, but mixing barrels and receivers of all sorts of calibers is just plain ridiculous.

I still really dislike this idea. It convolutes the entire process of balancing weapons as well as making specific gun types less memorable. On top of that it heavily increases RNG factors of the game, which can be very unfun when you’re down on your luck. I feel like Nelson’s current expansion of gun attachments and such is a nice way to make guns more “customizable” and less repetitive without making all the guns just “Generic Assault Rifle #342”. I personally much prefer memorable guns with slight variations than a complete just mix and match based on RNG’s whims and fancies. Plus, for me at least, the jarring and very obvious “randomization” of parts kind of breaks immersion and the realism factor.

Glad you like it, the guns in the example sadly look abit of because of there collors. They should have all collors normally like a skin

Hmm i feel you! But guns would still have rarities and their stats based on that, so if you kill a mega you wont get an awfull RNG gun. You are very right on the memorable guns though because there wouldnt be a famous feared grizzly anymore. I think what this would add is the hunt for that perfect gun and just discovering new combinations to try

Dodnt nelson say he wanted to favor fun systems over hyper realistiv ones?

While Nelson has said “Realism for the sake of realism is bad”, it has been confirmed almost since the announcement of Unturned II that Nelson intends for it to be far more immersive, realistic and hardcore than Unturned currently. He didn’t say anything explicitly about “fun” mechanics.

In addition, existing gun modification in Unturned II already seems to be taking a direction towards that of Escape From Tarkov. Your suggestion, however, appears to be vastly incompatible with it, given you’re mixing parts of completely different calibers, manufacturers/pacts, and rail types. Randomly mixing gun parts as if they were Lego sets is incredibly wonky in my opinion (in addition to completely breaking game balance and immersion), therefore I disapprove of it.

I can see this ideas potential, that’s what I’m saying. You have to look beyond the aspect that the weapons have in the picture like for example, the heartbreaker version is not the best.

Hey everybody has its owm opinion

it worked in borderlands

Hey everybody has its owm opinion

I am fully aware of that, but you have to realize that Borderlands is far from realistic or comparable to Unturned II. I’m just saying it’s almost certain this suggestion will not make it into the game, as we already have a better, more balanced, more realistic system in place.

So? Were having some fun discussions right? Never bad to have those

I am fully aware of that, but you have to realize that Borderlands is far from realistic or comparable to Unturned II. I’m just saying it’s almost certain this suggestion will not make it into the game, as we already have a better, more balanced, more realistic system in place.

If we are speaking of realistic game mechanics then I think that this suggestion could totally fit, maybe as an extra thing that you can also do.

The problem is, having item rarities won’t “fix” RNG when there are so many factors in the gun, unless only the “base” of the gun has any effect on its stats. I might get an “Epic” gun from a mega, but it could still be shit-tier because the gun barrel and stock cause the gun to be extremely uncontrollable with horrid recoil control. Besides, I’d rather see the elimination of “tiered” weapons, as it sort of takes the viability out of using certain weapons. If one weapon is objectively better than another, then who’s going to use the worse one?

On top of all of this, as GreatHeroJ said, Unturned II plans to be a lot more realistic and immersive. This idea seems to go in the opposite of that, and honestly looks like someone just messing around with LEGOs, like they’re mashing different settings and LEGO sets together (Unfortunately for them, Indiana Jones did not in fact fly a spy jet in Episode 6 of Star Wars).

Gun modification already accounts for being able to switch parts of almost every kind, including receivers, barrels, handguards, stocks, and both front and rear sights. However, it does so with real restrictions in mind, such as not being able to use a barrel engineered for 7.62x39 caliber with a receiver that uses 5.56x45 caliber.

This suggestion basically takes that and reinstates it by removing any and all restrictions on component compatibility. It’s even less restrictive than the system in 3.0.

Hmm just came up with a decent example

Why would we only need real life guns? Why not “fictional” guns and with fictional i mean no laser guns but just guns that dont exist irl. And if you dont mind that what would be wrong with this system?

Edit: you answered it above cheers!

I’m not sure how this suggestion could be comparatively realistic? Could you elaborate?

Im not either haha (sorry bud)