I would like to give some suggestions regarding the food and hydration system.

First of all, I would like to begin with the food. Similar like in the game “Survive the nights”, there’s a feature where you actually physically have to cook food by putting it on a stove or cooking plate. it takes then some time to cook the food depending on what type of food. You could maybe also be able to cook canned food, which than gives more food/hydration.

It could also be nice to make some sort of “stew” of “soup” from various ingredients. Let’s say a bunch of different vegetables, and noodles would make a soup that gives a additional effects such as, heat, hydration and food, and the vegetables could affect your health, perhaps making you have more resistance.

Each food would have their own value of “calories”, the effectiveness of your food would be perpendicular with the calories. Certain ingredients combined would form a dish which gives additional effects, boosts and calories.

Now let’s talk about the hydration.

A interesting way of having a source of water, is by boiling salted or dirty water, this would only be possible with a cooking pot by putting it on a stove (which needs firewood and a lighter/matches to work)

Another interesting way of getting water, is by finding drinkable water for example from sinks in houses, water towers, bottled water, etc.

I hope these are some good suggestions, I my opinion their not too realistic but not too arcady aswell so they should blend in perfectly.

I find your ideas interesting, and I agree with the food part.
I think it would be nice to be able to make debuffs, for example eating a raw noodle, would cause thirst, this would give even more reasons for the player to give preference to prepare food.
As for the thirst part, the only thing I don’t agree with is getting potable water from salt water by boiling it, maybe it’s more interesting to make it potable using a solar still.

Thanks for the feedback, I appreciate it.

I don’t really know what you mean by making water with a solar, doesn’t really make sense.
However if you could explain it more in depth I’d be able to understand it more.

I don’t really know what you mean by making water with a solar, doesn’t really make sense

It was probably the translator who translated the “alambique solar” as a meaningless word. 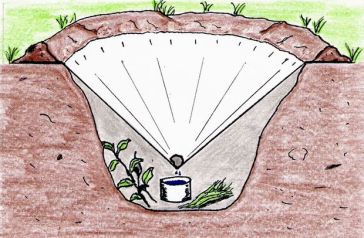 This is basically the image here, but instead of plant leaves (which can also be another way to get water) you can put salt water in a pot. Then the water will evaporate, condense in the plastic bag and drain into the bowl, leaving the salt underneath, as it does not evaporate.

Ah I see, this looks very interesting. Although I don’t think it would fit in to the realism level of Unturned. However It could be a very cool mod idea, which I could try to make if you give the permission.

Although I don’t think it would fit in to the realism level of Unturned.

It really isn’t that complicated or super realistic. It could just be a buildable item that the player adds salty water to, and over time, it becomes potable water.

However It could be a very cool mod idea, which I could try to make if you give the permission.

Feel free to make this mod!
Is it now for Unturned 3.0? If so, could you give me his link when it was ready?