A revamp of one of my previous posts, On Preserving Food. This time I seriously overanalyzed a series of college and university-level documents regarding the spoilage process and how certain consumables would be affected and how measures could be taken to prolong the shelf life. Links to all sources used will be provided at the bottom of my post.

Let us begin by categorizing the various types of foods based on their shelf life. Based on this I have found three major categories:

Food spoilage is affected by a variety of three major factors; physical, microbial, and chemical. This goes really deep, so I’ll just summarize it and spare you the details. 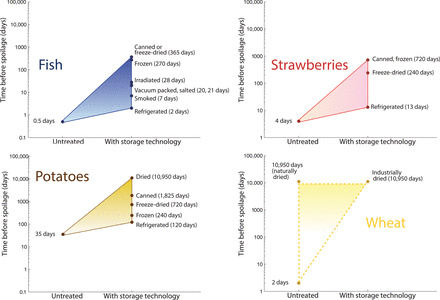 Study of traditional methods of food preservation, its scientific understanding and technological intervention

Its a good post, but Its good that you simplified it, but i think it can be done a little more simple.
how about limiting it to drying, salting/sugering, pickling, canning and freezing. freezing being a late game option that leaves the food unaltered.
Keep up the ideas.

Well, you see, sugaring, curing, and sugaring all fall under drying. Pasteurization is simple enough, just boiling liquids, and fermentation is important, otherwise we can’t make alcoholic drinks. If anything, pickling and canning should be endgame because it’s significantly harder to pull off, requiring sealable glass containers, salt water, a hot water bath and tongs. Freezing should be comparatively easy, as all you need is ice and snow.

and fermentation is important, otherwise we can’t make alcoholic drinks

i forgot about that, using alcohol as medicine, a pain killer and antiseptic in one. pickling i don’t know about so you must be right.
if none were redundant i dont see why they couldn’t all be added in.

Would be interesting to see vacuum sealing as the end game solution, you can buy small toaster sized ones so would be a neat but costly find at electronic stores. All in all good suggestion, not sure why you need sources for a game suggestion but hey