Just a “quick” suggestion about a couple grenade reworks, as well as some new ones. To start this off, the default trigger for tossing grenades should remain bound to [Mouse 1], however holding [Mouse 2] should allow the player to cook the fuze on most grenades (with the exception of impact grenades), with the crosshair pulsing once every second as a visual indication. Of course, cooking grenades for too long will result in the explosive detonating in your hand. Sounds fun.

Which types of grenades would you like to see in Unturned II? Please leave any thoughts, concerns, and suggestions below.

On a side note, I wonder if Fuze’s Matryoshka could have a place in UII…

You would not believe how much time I spent making this simple of a post. The AT grenades are more of a “raiding grenade” deal, if you haven’t noticed.

Good post though, these should be in. I hope grenades are balanced in that they are very strong, and can usually one hit kill, but shred gear when someone is hit with one, to make grenades a “piss off and die” button. You should also absolutely be able to cook nades, as well as throw them pretty far because its easy to throw things irl.

Also, modular grenades. Although they might not be significant enough to warrant addition into Unturned, I don’t know as I haven’t done much reading into the topic. 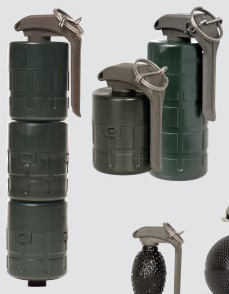 I think modular grenades might be a bit overkill/unnecessary, though maybe combining other explosives like say C4 packages should allow for a greater destructive effect.

Rifle grenades are gonna be seperate, as this post specifically covers hand grenades. I did see something about modular grenades, however I don’t know how this could be properly implemented without people chaning 50 grenades together.

GRENADE!! (there’s a massive pile of people on top of it.)