Hitting with the gun

When the weapon is in safe mode the left and right mouse buttons serve to hit.

It could also deal minor damage in order to avoid abusing the mechanic and to actually get people to use genuine melee weapons.

Shoves people to deals like 3-5 damage and some knockback.
Or you could go with a blunt hit that’s caused like 10-15 damage. I don’t know.

While not quite as lethal as a swing from a plumbing pipe or a stab from a knife, it would have the function of deterrence and utility beyond firing bullets.
I’d imagine it would wear the gun’s durability down quick, though, given that external percussion isn’t what a pistol is typically designed for.
A rifle would be similar, but being capable of shoving and striking. You’d probably get more range out of a rifle strike, though it’d likely be a tad slower due to an item’s weight.

Decent idea, though it wouldn’t surprise me if Nelson already had this idea written down somewhere.

Alternatives to activating the safety to switch to meleing that I’ve seen people assume or propose are having a dedicated key for “alternate attacks,” having different “fighting stances” for different types of attacks, and whatever this mess is 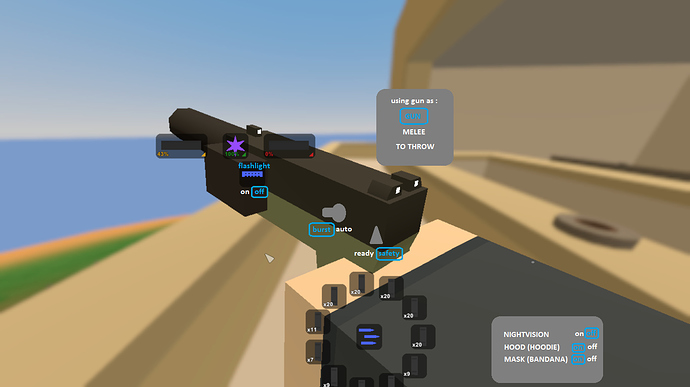 I would personally be fine with having a key for alternate attacks, having to set the weapon to safe, or having both of those options available. (The other solutions I mentioned earlier seem suboptimal IMO. I mentioned them simply for completeness, but if someone supports them I would probably be willing to discuss it.)

Rather than hitting with and breaking pistols, I’d personally prefer that meleing with a pistol do the same damage and animations as punching without a pistol. (except in the cases of pistols that are specifically designed to be used as melee weapons, like pistols with blades, knife pistols, and many styles of flintlock pistols.)

When it comes to long arms, I would say that striking with the butt should not damage the receiver just the stock, and that strikes with a bayonet affixed should just dull the bayonet. A damaged stock would cause problems with accuracy and reduced damage when meleing. A bayonet is specialized for meleing, so damaging it wouldn’t cause issues besides reduced melee damage.