Is there going to be hotbars in UII and how are they going to work is my question.
What is the system and balancing going to be?

I would love to hear if other people have been thinking about this and what your thoughts have been on this subject.

Personally I love how the hotbar system is in “project zomboid”, as a quick explanation

This system is very appropriate for a survival game and it also makes it easily understandable. It’s well thought trough and it is quite simple at the same time at is gives some depth to the game.

So I wish UII would have some kind of system that would fit the game and would give some depth at the same time.

Is there going to be hotbars in UII and how are they going to work is my question.
What is the system and balancing going to be?
… … …
Holsters give you slots for handguns

This is somewhat-relevant although the context is a bit different:

I would also like to address the tertiary weapon slot suggestions. That completely makes sense with how equipment slots worked in Unturned, and how they appear to work in Unturned II, however I intend to revise this in the future. In 3 the purpose of primary and secondary were to provide a visual indicator to other players of whether that player had weapons or not. They might have weapons in their backpack, but the only quickly accessible weapons were visible at a glance. Otherwise the slots function similarly to hotkeyed items which were added later. You do not necessarily have your primary or secondary equipped, you could have an item from your bag equipped instead. In 4 those widgets are only ever the actively equipped items. Each clothing item will display which weapons may be contained as holstered items to solve the visual indicator of weaponry. Item quick access will then be handled separately with bindable hotkeys and/or a quick select wheel, and whatever else is suggested for quick access.

Edit.
I wonder how tired I was yesterday cuz I didn’t understand everything about the comment in the brass knuckles topic, But now when I have read it again I understand.

My favorite system would be a combination of DayZ and C:DDA’s system, which is you can hotkey anything and pressing the hotkey simply acts as a quick of equipping it, but equipping stuff from your backpack takes a long time, so to remedy that you would find/craft holsters, straps, scabbards, etc, which give a huge draw speed boost. Being able to both hide and effectively use three LMGs in your backpack is really stupid to me.

I feel like actually storing anything larger than a knife or pistol in your backpack should make it such a hassle to equip you just don’t do it at all, and opt for a strap instead, which also means you would be able to actually realistically see pretty much the extent of a guy’s arsenal at first glance.

Hiding ten bluntforces in your pants is gay.

Just having free slots to stick weapons in that make them your primary/secondary/tertiary etc weapons feels really bland and boring to me. I’d love if finding a holster feels like an accomplishment.

sounds good and yes equipping weapons from backpacs would be quite op and unbalanced if you ask me.
also I think that it would break the immersion in the game too quite much which wouldn’t be so nice.

I thought when I saw this post you may have brought it up because of the post Nelson made about Brass-Knuckles. Like Molt said that post is somewhat relevant to this but still a little different.

I had a lot of ideas flowing through my mind from that post about brass knuckles regarding hot bar related items, but didn’t want to get to off topic and change its direction.

Being a fan of DayZ something I have always enjoyed was the pistol holsters, allowing players to have there primary and secondary on there backs, and have a holstered pistol to draw quickly and save inventory space. From personal experience I have been saved from it as the pistol from the holster draws faster than long rifles. I was walked up on a dude who tried to kill me and I was able to pull on him and kill him with the pistol where my rifle would have gotten me killed.

I always think of things like this when playing Unturned, regarding weapons like pistols. I would personally carry an ace on me if I had a holster that saved inventory space and offered a quick draw third weaponry slot, rather than casting it aside when I get better gun. And not to say the ace is bad, its actually great but I would take most smg’s over it. Also how bad ass would be to have a chest holster or belt holster sporting an ace. 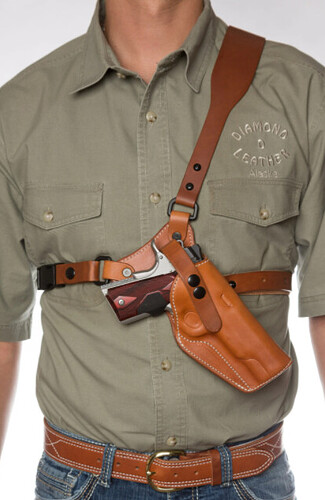 But to get more in line with your original idea of hot bars. I think something similar to 3.0 would do with some minor tweaking. Especially with the feature already in the beta where guns in your back pack show visually on the outside of your pack. Maybe those two guns/melee weapons will be our Primary/Secondary? Leaving primaries/secondary’s to the only weapons’ hot keyable unless having gear like a sheath, sling, or holster. But items would need lootable or maybe craftable items to access quick access like ammo vests for mags, and satchels for food, medicine, or binoculars. Other wise you would have to dig it our of your inventory interface.

I feel like a lot of players in the survivor community enjoy kitting out there player, and would love to see things like additional holsters or knife sheath holsters to be extra efficient in survival. 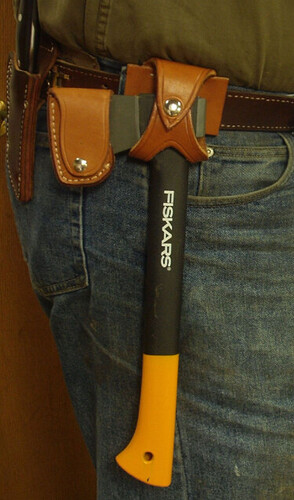 I would LOVE to have utility items like this save space in my inventory and give quick access to axes, meds, and food/drink. You can see in the picture that dude has a canteen or thermos and a satchel. I could see the satchel holding food and meds. In 3.0 I don’t even carry a canteen with me cause it fills up a 2x2 slot in my inventory. But if I looted a sling or some kind of belt thing, I could attach it on my person saving inventory space and looking fashionable will doing it.

One of my favorite small features in U2 already is the physics of the backpack and the guns that hang on the side. Looks like I am wearing a back pack and those items are really moving. Would Absolutely go berserk to see things like holster, quivers, canteens, and satchels dangling of our character, looking like a real survivor. I think this discussion goes a lot deeper than just combat weapons but should also include survivor items like thermos, cooking pots, and knives.

And as a side note obviously there would some implementations to make sure people could abuse the system and carry 45 things on slings, your character will only have so much room for accessories. I think the weight system will help balance that a little, slowing pack rats. As well I don’t think people should be overly concerned with how it only affects PvP. Seems AI combat will be more of a focus in U2 compared to 3.0 so getting the upper hand with quick accessible items would be cool in our progression against PvE.

A lot of people seemed to overconcerned with niche scenarios where players could abuse systems. And where features need to be refined to reduce a abuse, we need to remember the game is suppose to be fun and not everything revolves around Pvp as U2 is a world of PvP and PvE. 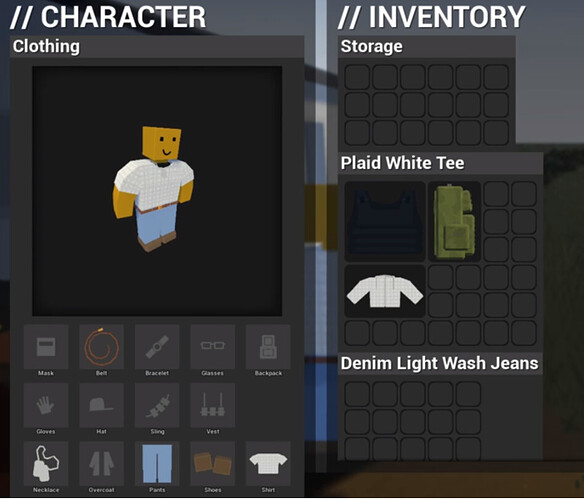 This always got me excited seeing the the sling option for something like a quiver or canteen.

I thought when I saw this post you may have brought it up because of the post Nelson made about Brass-Knuckles. Like Molt said that post is somewhat relevant to this but still a little different.

yes the brass- knuckles topic made me bring it up but i did not want the other topic to go off topi so I decided to make a discussion topic for this here instead.
I was also not completely sure about what nelson ment there.

I love the idea of visual holsters and such and the way you explained it sounds really fitting for a survival game in my opinion.
In 3.0 you really dont want to carry a canteen with you cuz it takes so much room and only has one use, but if in UII it could be attached externally and had a few uses I think the canteen would be used more.