How do I add my spawn table to my server?

I have a server and I figured out how to make changes to spawn table in unturned client, I did apply the changes I did and I found the settings in my unturned folder (they work in singleplayer correctly) but I have no idea how to add the changes to my server, my server is on a completely different computer.

It sounds like you edited the map directly, rather than have either:

You shouldn’t edit the map directly. Make the changes on a separate map (or as a standalone mod, depending on what you’re doing) that you can upload to the Workshop (assuming it’s either an official map, or it’s a Workshop map you can reupload with permission).

I didnt edit the map at all, I did changes in the spawn table in the main menu 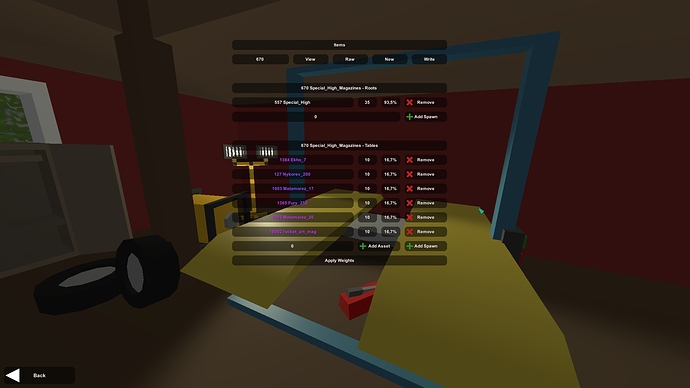 You shouldn’t be editing the source files of anything. Any number of maps (official/curated/workshop) can use those spawn tables.

If you’re just adding to spawntables, you should create a mod that just adds the custom spawns as childs to the parent tables.

And then verify game cache afterwards, which will fix the files you’ve edited.

But I can’t upload anything to the workshop, I don’t have any other options then, I don’t know how to do modding

Shouldn’t the spawn table be easy to add to server, after all, players don’t impact on what items spawn, server does that. So why would they have to download another mod just so server can spawn different garbage on an already predetermined location?

Welp… this thread can be closed as I found an easy solution which somehow worked… All I did to make the modded files to spawn was drop the changed vanilla spawn table folder (not all, just one with modifiers) into a mod folder with spawn tables already setup for it’s guns (Nordic Armory 2.0 which has a spawn table for it’s guns) and it works. Turns out you don’t need to upload anything, as long as you have a mod that already has a spawn table, you can just add it there.