How to lose items

in 3.x we have 3 options of how to lose items

Not quite sure what you mean here, but what I think you are trying to say is that items can be destroyed if they are shot at or chomped on by the Turned if the items are at a low enough durability.

i am big confused

The only place I’ve seen these features are in plugins, and I don’t like them.
The removal of the possibility of losing everything you have in your inventory really removes any threat’s threat.
This has no place in a game like Unturned 4.0, 3.0 is fine though.

But of course, these points don’t justify not having it as an option, so sure, why not?
(Unless Unturned 4.0 wants to force more risk-full gameplay, which I would be ok with.) 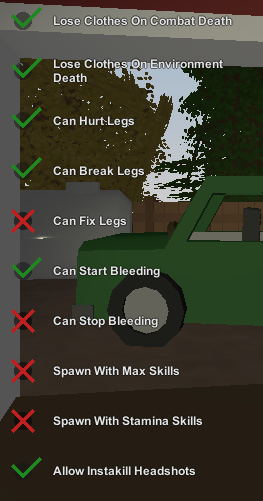 he is talking about rocket mod, and how when you die there is a setting which allows you to not drop the stuff in you inventory. I have no idea why he thinks it is a good idea to not lose all ur juice when you die.

Huh, so this has the chance to completely neutralize any point for PvP?

I think losing all ur stuff but body interaction would be cool so like you go up to the body to grab loot instead of it exploding all over the place which would also decrease some lag.

If you die with stuff on you, then you should drop all of that stuff when you die.
Anything less is fucking heresy.

The only issue with losing loot in unturned is how far away from death you spawn, prehaps a local spawn option? i think i would be good for a vanilla if you could have a no item loss option or a scale. What would be the point in PVP, nothing, i don’t want to be always pvping on a surivival server as for skill loss. I hate the idea. Or skill loss should only be to a point. Like once you pass a checkpoint you don’t go back even if you die a thousand times.

If you die with stuff on you, then you should drop all of that stuff when you die.
Anything less is fucking heresy.

Yea, but, hm… what if you will die in explosion caused by c4, vehicle, suicide belt or whatever else?
Can all items survive a blast?
Somebody also mentioned items in pockets/backpack destroyed by enemy bullet.

What about a weapon/item held by a player, or weapon in the backpack (it’s visually outside of it, attached to backpack)?

well at least someone gets it

I am suggesting not destroying items but options of what equiped items(shirt,pants,backpack,vest) will be dropped upon death determend by percentage from 0 to 100

Hm hm hm…
Stalker system?
Items can’t be dropped upon death, you have to scavenge player’s cold, dead body to look for items. Of course, items actually held in hands in the time of death drops on ground.
Bodies dissapears after certain amount of time, small enough to not cause serious fps drop while mass murdering, but high enough to let someone scavenge body even after long, safety approach (instead of running like an idiot without securing area, to prevent being another dead body to loot).
Idk, like 5-10-15 minutes to dissapear? 5 seems not enough, while 15 great, but a bit too muh for a server capabilities, when suddenly half of server population will die and respawn (lel, that would do some shock, to scavenge your own dead body after respawn… if only it wasn’t just a game. in real life it would be a really strange feeling to even look at your own dead body, not mentioning even about looting it :3 ).

Looting corpses is confirmed, so it’s assumed that in the default setting, all loot which wasn’t utterly broken/destroyed when killed can be taken from the corpse. So there must be a balance between gameplay and making sense.

Being that said, IMO the main settings for custom options for loot loss upon death/looting bodies should be these:

More ideas on all of this as it comes to mind.

These settings could be useful for RP and dedicated PvP servers, so there aren’t shit tons of unnecessary lootable bodies on them.

lets simplify even more
in 3.0 you die you drop one of the following

I suggest add - you die you drop one of the following besides 3.0 options