Hello, this started about 2 days ago.

A main symptom of this issue is the message “Lost connection to host or Steam network” upon attempting to join any server. At first, server lists stated that they had 1/1 or 0/1 players online, for every server. Upon verifying files, ‘players online’ numbers in the server list have returned to normal. Upon clicking on any server, No details or players will load. Upon attempting to join any server will result in loading, then a ‘server has not responded in’ message, and after 10 seconds, we are booted back to the main menu with the error message.

I have been trying to fix this for a day or two, but no luck. One guy said he talked to an Unturned Dev and he didn’t know what was wrong, and fixed the problem with a windows reset.

Upon looking at firewall inbound settings, all Unturned and Steam rules were set to ‘Allow the Connection’. But upon launching Unturned, all the Unturned rules (I think there were three) completely disappeared from the list. As in, there are literally no rules starting with U anymore.

I shared my log to someone on discord, he said that:

"hmm it’s just super odd, the details screen is just a simple UDP packet query named “A2S_INFO” directly to the server. It’s entirely stateless, no need open a persistent connection with the server or anything. Basically implying your connection to the server is super-blocked, not just failing to establish a new connection when loading, but unable to contact at all. But yea, I would try basic firewall debugging stuff (disable firewall, if you have any third party antiviruses, try disabling them / checking what they are blocking), perhaps try other more popular servers.

More and more people are complaining about this exact issue on the Unturned Discord, but I didn’t see anything like that on this board. Hopefully we can fix this here :). 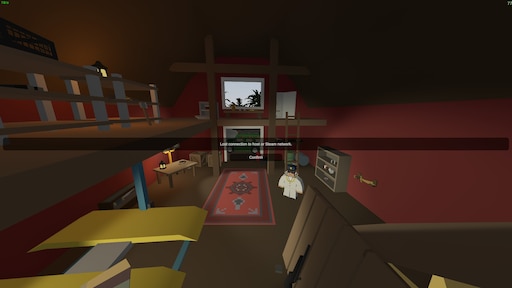 Steam Community :: Screenshot :: Anyone know how to fix? :(

Steam Community: Unturned. Anyone know how to fix? :(

Only Steam Discussion on the issue:

cant connect to public servers at all :: Unturned General

i need some help with my unturned, i basically cant connect to any server at all when i connect to a public server is give me this massege "Lost connection to host or Steam network" and every fix i found was related to people making a server and also...