Did you have a MISERYable time or was the game just full of Dead Air?

those puns were so bad

No, I was doing a run on Stalker difficulty with Arsenal Overhaul 3.1 installed.

Oh man, I’ve had that installed for the longest time, I love the AK-74u’s opening animation.

Strelok, Sokolov, and Kovalsky all died

There was no fucking way I could keep all three alive when there were fourty fucking Monolith shooting at us.
…
…
I’M SORRY!

I cheated and used the AS VAL, it insta-kills anything it looks at.

Strelok had the minigun

Should’ve given him the knives if he was going to rush. 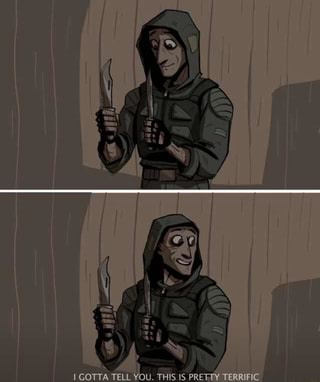 Oh, sure. And I should’ve given him my spare exosuit while I was at it.

Call of Pripyat on Stalker difficulty AND everyone dying? Really?

Look, I COULDN’T SAVE THEM AT ALL! I’M SORRY!

i beat the game on master and i didn’t even know the party could die during evac. the fuck, comm.

Yeah, it’s not hard to beat the game with just a Sunrise Suit and an AK.

At least that’s how I did it.

I only used half a loaf of bread and my socks.

cool but why did you need to post it

who is threatening you? Is it Xi? Is it the chinese mafia or some shit?

What the fuck…
A single shot from one of the Monolith snipers brings me down to half health, and this is with THE STRONGEST ARMOR IN THE GAME. And there are FIVE SNIPERS.

Yuo see Ivan, when you hoard Normal, Medical and Scientific health kits throughout the whole game, morphine syrettes are just as essential as water.

For real tho, I was sorely underprepared when I started the mission unknowingly, but I still had my wits, my vodka, and my 3654 AK bullets on me when I did it. I played the mission with about 15 regular medkits, 21 military ones and 19 scientific ones.

I had thirty military medkits on me, Zulu’s PKM, an exosuit, as assload of Vinca, my Gauss gun with 67 batteries, a KS-23M with slug and sharpnel rounds, and 1200 rounds of 7.62x54mmR ammunition.