I’ve been using the Unturned Dedicated Server tool through Steam and upon updating it to the new version today it has stopped working. Specifically, it throws errors anytime I or others try to join.
Without going on too much of a rant, this dedicated server tool is a very bad idea since server hosters can no longer run a server AND play Unturned at the same time, because Steam. I found a workaround for this that involves making copies of the Unterned.exe and Unturned_Data folders. I also believe this is why the update has broken my server. Does anyone know of any solutions? 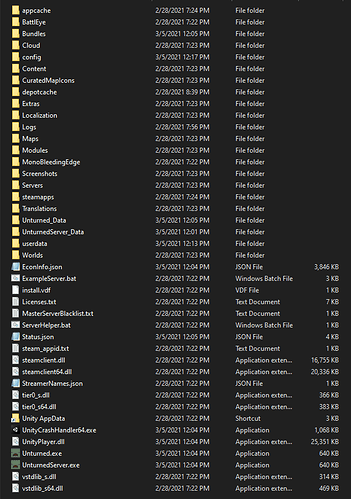 Here is what outputs to the console when I try to connect. I have no idea what this is saying lol but I hope it’s the key to finding out what’s wrong.

Here is what the console outputs on startup. I know it throws a lot of errors about addons and whatnot, but it has done that since I first started running because our workshop collection has some outdated addons. The server has run fine until this update, so I don’t think any addons would be the cause.

Things I Have Tried:
I have tried re-copying the Unturned_Data and Unturned.exe files with the new ones from the update, but I get the same error. If I run the normal Unturned.exe instead of my copy, I also get the same error. I have not tried a reinstall, but that is because I do not know where player & world data is stored and I don’t want to lose any of it if possible.
I’m not sure if this is relevant, but it appears that I actually do connect to the server. In-game, I simply see the Queue Position #1 screen and I never load in, but the server console just spits out that weird error and keeps running. If I run the players command I even show up, so not sure what’s going on here.