I was thinking about line throwers and how they could be used to assist in setting up tow cables, mooring lines, electrical cables, climbing/abseiling ropes, ziplines, and/or ropeways (if players could place any of those in Unturned II) however, it occurred to me that spontaneously anchoring moving objects to fixed points or linking them to eachother could create undesirable experiences (even if the physics engine could handle it, the driver would be unlikely to realize why their car is suddenly being pulled off a ledge for example) and mapmakers may find it problematic for players to so easily approach or exit any location from any direction. For this reason, I think that lines should not automatically secure themselves to whatever they hit (unlike in Gary’s Mod or in previous suggestions) but it may not be necessary to have players secure each end of the line every single time if players could secure one end of the line before firing or if players could use things like loops that automatically attach to animals if they hit, or grappling hooks that automatically affix themselves to specific materials. Perhaps larger line throwers could launch larger gauges of wire or even mine clearing line charges. Maybe lines could be attached to harpoons, which can stick into animals and can be thrown by hand, launched with solid or flexible devices, or fired from harpoon guns. This was just a shower thought from the morning and I’m really tired by the time I’m proofreading this (each day I’ve been waking up thirty minutes earlier than the last) so I apologize if this is messy, unbalanced, incomplete, nonsensical, or rambly.

This is a really cool idea. I would love to see some sort of grappling hook in-game, but it would have to be rare and hard to get.

this is what I see 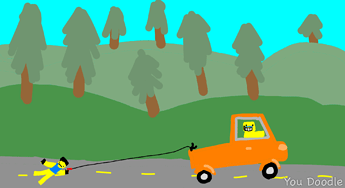 Maybe we could also have some sort of cargo transfering mechanism for carrying supplies over zipline or rappel routes.