Low effort and probably belongs on the steam discussions, but i liked this 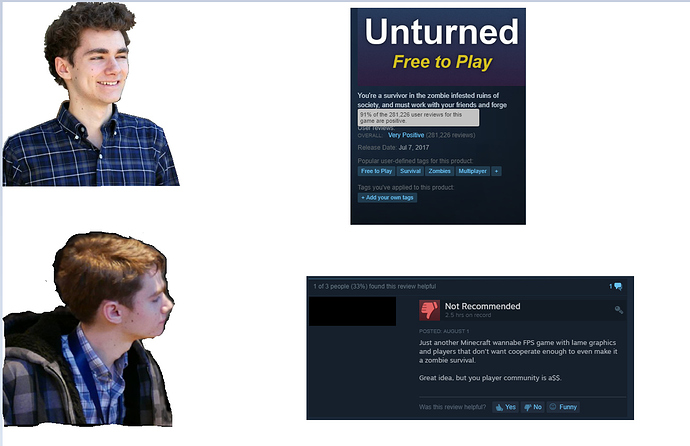 What can I say?

What if we removed all graphics based un-recommendations?

Half of the negative reviews I’ve seen were 7 year olds literally just saying “cancer” and “uninstall”.
The rest were talking about either the bad community or the glitches and how it crashes often. There are only a few reviews that I’ve seen that talk about the graphics.

I wouldn’t look at them often.

We will always have the Very Positive review status. It was never changed since the game was released, which is a great thing

The top negative reviews are actually well written, although it’s usually got to do with the community which makes them irrelevant to the game itself

It’s a pity the game gets all these negative reviews based on the community. Those reviews rarely talk about the actual game but I do have to agree as the Steam discussions and now the Subreddit are filled with flame wars and generally unpleasant behaviour.

I see. Good to know

I kinda wish multiplayer games had separate review ratings for the game and for the community, because I’m pretty sure 90% of the negative reviews are about the community