Melee with Guns? + A short story

Right. So I was just messing around in an online unturned survival server and I luckily got some decent gear. Maplestrike, full thief and a civilian vest. What could go wrong? Well, after looting through some towns without triggering zombies, I found myself without a melee weapon. Suddenly this guy starts shooting at me with his handy eaglefire from above. He manages to land a few shots on me and I end up bleeding. As I start shooting, I anger millions of zombies around me. The guy probably got scared and ran away but now I had a bigger problem. I was out of ammo and getting hoarded by 10 zombies. You probably guessed it. I ran for a couple of seconds unitl I was out of stamina and a runner demolished me. Then I immediately fell into a state of

and thought: Why not add a melee attack with guns? Just destroy them green zahmbies with that giant metal rifle stock of yours…

Yeah that’s pretty much it, leave your suggestions.
Sorry for that giant story btw, I just think that it shows a useful context and some unfortunate events that have happened to me.

Gun butt melee has already been confirmed/planned since the start of 4.x, it’s just not a priority.

While this would make a lot of sense, I do think melee with a dedicated melee weapon should still be far more effective than using a rifle stock. Literally swinging your gun at zombies should be a last resort.

It’d probably end up being about the same as punching your target, although it might be fairly slower with most weapons. Using a bayonet, melee weapon, or fist-enhancing punching-clothing would likely be better.

A beautiful story. Sad it happens to all of us…it would be cool if you could us your gun as a mele weapon

This reminds me something… 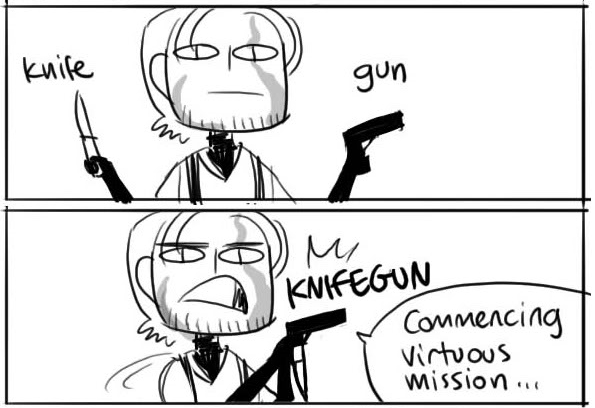 Perhaps using melee with your gun should effect its durability, that way it won’t be too OP.

Is the answer not obvious? Moar bayonets! And gun butt melee is a possibility as well.

If using the stock of a gun as melee, there’s a bunch of ways to balance it:

I was thinking there should be multiple ways of using a gun as a melee, though I’m not sure how much it would effect balance.

Gun butt obviously, it’d do less damage than a normal weapon as what Great said, but it should still do more than fists. And it should definitely degrade the durability much faster than shooting, and it should give a small cooldown before you can start shooting again. Though I think there should also be an option to keep your gun ready to melee, if that makes sense. So it’s not just Bash, Return to normal stance, Bash, over and over again.
Pistol whip would act the same as Gun butt, but it’d affect durability for the entire gun because you’re smacking someone with a whole pistol.

Shoving a zombie or someone else would be useful to get some distance, or potentially shoving someone off somewhere high. One benefit would be it wouldn’t affect durability, or it’d be very minimal at the very least. And you’d recover faster than if you just bashed someone with the stock.

Now I’m skeptical about how practical it’d be, but using a long gun as a club might be helpful if you’re really desperate. Two handing a hunting rifle like a baseball bat at the cost of pretty much ruining it. Damage and swing speed could be determined by weight so it’s kept fairly simple, and that could go for Gun butts and Pistol whipping too.
Some guns should be restricted from this though, so you’re not swinging a LMG like a golf club, though it would be pretty funny waving a anti-material rifle around.

Just some ideas though, nothing definite.

NEO Scavenger is an example of a game that executed this pretty well, balance wise.

Id expect a gun butt to do about as much damage as a stick as this is basically what a gun is without a bayonet.
Maybe its main use should be to shove off a fast zombie to let you reload while its staggered and shoot it.

Hmm considering that there is now doors in houses in unturned ||. It would be nice to be able to break open locked doors with gun butt. (only for enviromental doors, not player bases)