Modular Weapons: Bringing Back the Idea

With a little bit of work and a couple new parts, the Eaglefire has the potential to go from one gun, to two, or three, or even more. Throw some new colors into the mix and you have even more variants that can be made.

Here is a transition from the current Eaglefire, to one with green coloring and a simpler design for a stock and handguard. 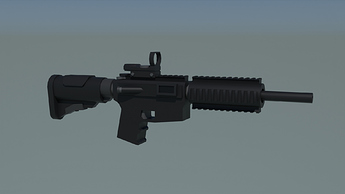 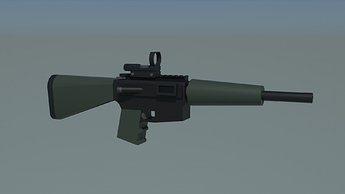 What do these three changes allow? A lot. This is a sample of six different possibilities including the original Eaglefire that can be made with them. 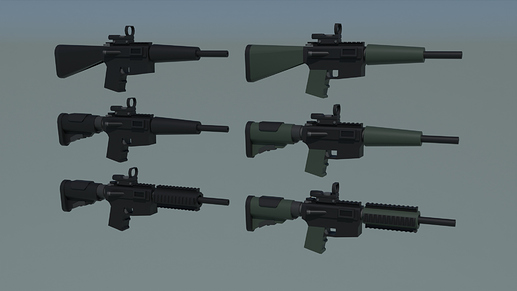 With just those two new parts and an alternative color as shown in the images, you can get at least 40 total variations if you are fine with mixing parts of different colors.

Want more variants? Instead of adding more parts, you can add more colors with minimal effort. Now there are more than 280 variants to choose from, although that number goes down by a lot if you strictly want colors that go well together. 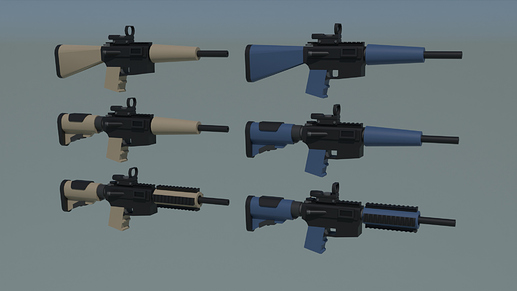 The goal here isn’t really to suggest something major but just to get everyone thinking about the idea again. Look at the progress for the UII version of EFU if you really want to see some of the more major changes in appearance and overall function.

I can’t remember who made it, but another thing that could demonstrate the idea would be this image that I saw a couple years ago (maybe from the Unturned Modding discord?): 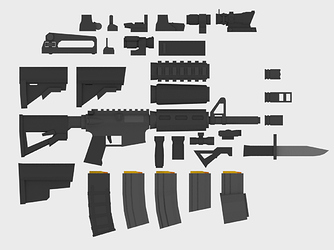 That’s all. It’d be nice to have a few more Eaglefire attachments in UII sometime soon though.

I definitely think that some variation of this could work really well. Like if you were to go to some military base you might find a more robust looking and/or different colour weapon and at a coalition outpost you might find something that’s unique to there (don’t hurt me I have no idea if the coalition is going to have any part in U2). But nonetheless an intriguing idea that has lots of potential.

More low effort but there could be parts specialized for certain roles, like making the gun into a DMR or an LMG.

Although in a final stage this would be intended to look more like the gun in this next image. I’d put more effort into the model if we knew more about how the Eaglefire is already planned to end up in UII. 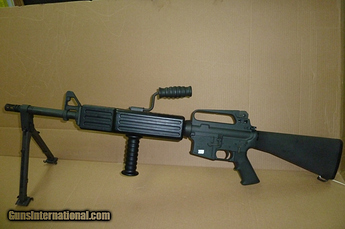 Very nice. I think with the ability already to remove barrels, stocks, and hand guards we will see some cool customization down the road. I really hope to see stats be tied with them too like removing a stock makes the gun lighter and faster to aim down sites but you lose accuracy. I like how the Elver map added this in a little bit with different stocks/attachments offering different advantages.

I think something major that needs to come to U2 gun-play is different aim down site speeds depending on the gun or its weight. If things like heavier/longer barrels came to the game they could be balanced with ADS time and movement speed (weight system).

More low effort but there could be parts specialized for certain roles, like making the gun into a DMR or an LMG.

We are probably saying the same thing but, I think instead of outright turning guns into another class, attachments could be used to alter the guns handling to mimic some attributes about that class. Example, a long heavy barrel/stock along with an extended magazine on an eagle fire would make it accurate and the aiming stability would be greater, but at the cost of the gun being heavy weighing you down and affecting its ADS speed. It would mimic more LMG properties but LMG’s would still have there uses over this variant.

Or removing the stock and adding a shorter barrel to an Eaglefire would make it lighter, more agile, and reduce ADS time mimicking a SMG build. But at the cost of having increased recoil and limited range due to the barrel length.

This is present in COD Warzone and I like it very much. It would seem certain builds would dominate and there is a meta, but you can use some pretty cool variants and be very viable. I think an addition like this U2 could be cool with aspect of finding these attachments through looting and offering different play styles with the same guns.

Effectively I think with the ability to change guns attributes Nelson wouldn’t need to add so many guns to the game to keep us entertained. As one gun could see three of four variants changing it characteristics, offering more game play option. Imagine if we could remove stocks and add short/long barrels to something like the Heartbreaker on Washington. It would be like having three options instead of one.