Nelson Sexton is back to Unturned 2

" Despite my recent excitement on Unturned , I should probably get back to more full-time focus on Unturned II … "

So finally, after a long time (4 months), the development of unturned 2 will be continued.
And it seems that after all this time, Nelson has realized the actual problems of the game.
So, with what he has said, it is assumed that this is some of what he will do while he is focusing Unturned 2.

The last thing I want to say is, 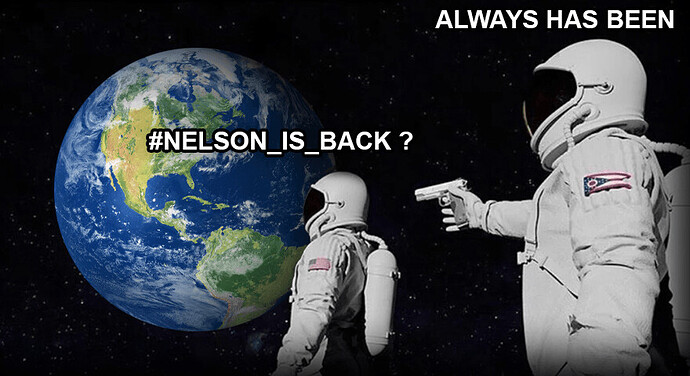 I see Unturned mainly as something simple that gave me a way to form a friend group online. Mod support is easy enough that it created a way for people to express some of their ideas without needing strong programming or modeling skills.

This is the BEST DAY in MY LIFE
Qwq #NELSON_IS_BACK

I think the core of Unturned itself has always been to survive the zombies, search for food and water, interact with other players and explore… But above all, THE CRAFTING AND BASES.
So you can feel the real experience of surviving against the danger of zombies and players.
That’s what made me stay in Unturned 3.0 for so long.

I saw what you said about Valheim in the blog post and couldn’t agree more. I generally never play games unless there is some kind of pvp, but Valheim was the best gaming experience I have had since I can remember.

To me Valheim felt like an evolved MMO and Survival. MMO’s and survivals to me have been the same for so long and I believe that is why Valheim did so well, it revised a version of what we all love. That is why I am so excited to see Unturned 2 because I think it has the chance to offer a survival experience we are all familiar with but sprinkle in some change to the sandbox survival with PVE elements. With some of the things discussed and brought up in the idea tank on the Trello I think Unturned 2’s potential is pretty good.

I would love to see what we all now today as Unturned Vanilla, but with more of a focus on the survival being against zombie AI, food, and the environment. I think the core of Unturned 2 should be built around surviving turned attacks, securing your base, upgrading the base with utilities and defenses, surviving the seasons, and cool things like excursions to do. Coupled with the open world PvP sandbox we are familiar with this game could a breath of fresh air from games like Rust, Dayz, and many others.

To me, something I really enjoy in games is the upgrades and utilities to your player or base. Having certain items that allow you to craft certain things or achieve certain tasks. This is why I like Valheim so much. Your base could be outfitted with the cauldron for potion brewing and different cooking recipes, upgraded stations that made you better armor, windmills to produce flour and different crops.

Its not all just about making your base full metal or just a plain grind to have the strongest base. But have a base that provides a lot of utility that makes your survival experience easier like electricity for lights and warmth. Or cool things like a stronger fishing pole to catch certain fish or certain weapon that is really good against Turned.

I would love to see the core of Unturned 2 be you versus the environment. If the PVE is good and threatening the PvP will follow behind it.

Also very happy to see U2 back in the spotlight.

I personally think that the focus should be mainly on UII if that’s what you’re asking. If we’re talking about the focus of Unturned II, i’d say optimized and robust controls, mechanics and overall gameplay. As for what the core of Unturned is: An accessible game that appeals to many people for different reasons, along with mod support and hopefully, transparent improvement on feedback and progress.

Rust is appealing to the hardcore survival players that have no problem farming, defending and raiding bases for hours and hours on end.

DayZ appeals to the roleplayers and the ones that want a realistic setting and gameplay.

7 Days to Die appeals to the casual players that want a fun co-op experience.
And Unturned takes a bit of all of them. Everyone has a place, everyone has their own reasons to play it and the mod support can bring a lot of things that will otherwise take away from your own time spent developing the actual game. And it’s very accessible, since it’s not as demanding as DayZ or Rust and it’s free.

All the way back since 2.0 unturned has been one of my favorite games, and I believe the reason for that is.

For me, Unturned has always been more then just the actual core survival experience. What always kept me coming back for so many years is how well developed the modding community is. The ability to change the game in so many fundamental ways has really improved my experience, and most of my playtime is on fully modded servers. And as far as I can remember that’s still gonna be the case in UII.

As for the actual core of the game. I’ve always found it to be a simple survival game with a focus on a multiplayer PvP experience. Mostly being fighting for your own little slice of the map, just around where your base is. And of course making enemies while doing so and trying to raid them before they raid you. It also helps a ton with all of the PvE things to do in the background of this larger PvP struggle. Stuff like quests, deadzones, megas and horde beacons really tie the game together for me. And I say tie together because I never really felt that these elements would really kept me there when playing singleplayer. There’s something special about killing a mega and getting raiding supplies that just doesn’t translate into PvE.

So in short, a simple survival game with a large multiplayer focus. Where most of the time you’re preparing for and getting into PvP fights with other players. Supplemented by PvE elements that help you on your way.

I guess the core of unturned, was the customizability, you could do so much other than survival.

Personally I like the idea of the environment being the real enemy of the player.
Hunger, thirst, temperature and enemies like bandits and zombies should make players want to come together to survive more easily.
However, I expect a more down-to-earth pvp, more difficult ammunition to get, and weapons with more violent kicks are good alternatives to prevent players from shooting like crazy using an AR while jumping like rabbits.

I feel that Unturned, while debatable in the depth of its survival elements, has always excelled in one niche particularly well - it is an accessible and adaptable multiplayer sandbox environment, made even better by the large scale of its modding community, and with a low skill bar required to get into mod making. The appeal of such an environment being playable by just about anyone allows for a lot of gameplay variety to spring up in the community, be it different playstyles, custom maps/modded experiences, or even community-made gamemodes completely beyond the reach of the survival/arena base game.

It’s also a particularly enjoyable game with friends, and there’s a social element that makes it easy to have some good memories playing Unturned (which I absolutely have plenty of myself). It helps when you can share the surreal and goofy moments you get playing Unturned with friends and strangers alike.

From the meta-perspective, I also think your frequent interactions with the community and constant updates/long term support for the game has contributed significantly to these aspects being as positive as they are. Few games have such interactive developers, and even fewer can attest to the degree of success Unturned has had over the years because of it.

it is an accessible and adaptable multiplayer sandbox environment, made even better by the large scale of its modding community

I can agree with this. Unturned, while not similar to Gmod in terms of options available, has grown through mods into being so much more than just a zombie survival crafting game. I’ve seen tons of different kinds of RP servers, creative warzones, story-based exploration maps, and much more.

In my opinion, UII’s largest shortcoming at the moment is an utter lack of information on what’s going on behind the scenes. While you do occasionally post devlogs showing off features and technical stuff, it’s nowhere near the weekly/biweekly updates that 3.0 was receiving. Even if it’s not the update itself, just a regularly posted update blog would help a lot seeing where development is at any given point in time, what’s being worked on, and it’d help increase the dev-player communication, because I know in the past both the community and yourself have mutually benefitted each other through discussion before, but that’s tapered off since about a year after the forums went up.

I wonder if anyone has thoughts on the focus and what really is the core of Unturned?

A happi game where I have an excuse to tell you you’re awesome! ^-^ <3

@SDGNelson Hmm soon I will be making a few ideas for the rifts and what not that are planned for UII, possibly a few ideas how it could work and these said rifts could lead to other worlds, so Nelson can work on maps that are not based in our world so to speak.

What would you think of this?

It’s great to see how the developer of this great community, can bring it back together again with his return. uwu

Don’t get hotheaded, it’s not a return yet. Wait for the new devlog/s or post to get up and then you can get your hopes up.