Especially considering the only thing Nelson would need to do is add “Disable_Horde_Beacons” and “Construction_Spawns_Explosives” settings in the server config file, just like how it was done with restricting character slots.

I only play Vanilla games, since the last BattlEye fix that blocked me from
Playing Unturned, I have joined three servers, 2 Russia’s and a Washington. I always look for more option. Modded feels too cheesy and lame x10 loot OMG,… yet… I have only seen 1 single Vanilla server with restrictions on mules, that server didn’t last past a month.

Back to the topic, I play in PVP servers all the time, and I see a lot of:

And now in my current server, EU Vanilla Russia - Unsharp Gaming, my clan told me to talk in Area Chat and only engage if they don’t respond. That’s as closest it can get to a pure survival experience. I don’t see people just killing each other constantly. And I have by Steam count, 3.850hs ingame. P.S.: One of my 5 pawns is about to get Paragon, a few quests left to achieve title and aiming for MKII.

I think the game is fine as it is.

That’s great and all but it has nothing to do with the topic at hand. I was discussing raiding and Horde Beacons, not PvP/KOS. This is like a gardener complaining about his flowers not blooming and the second one saying “I don’t see the problem - my potatoes are growing well.”

Maybe this discussion is way over your head. I specifically quoted a small line out of you whole comment for a reason. The topic at hand is “How to turn Unturned back into a survival game”. My follow up comment simply stated that not all servers are pure war zones. Take a chill pill.

You’ve quoted my suggestion of adding two settings to the server config with a counterargument of “this server isnt a total slaughterfest so it’s ok”. Absolutely phenomenal argumentation. Rain himself would be stunned.

Okay, that server you play on isn’t a total warzone? (None of the large maps really are.) And? Does that magically fix the balance issues in regards to raiding and Horde Beacons? No, it does not. Here you are following in the footsteps of danaby, who has yet to further articulate his position; you are confusing PvP with raiding.

Althought I must admit, the title was not particularly accurate. “Nerf Horde Beacons” would be a more fitting one.

Me: Getting Devil’s Banes and ekhos from the Horde
You: NERF IT HAAAA

Actually refute any of my points or don’t bother commenting.

This post was flagged by the community and is temporarily hidden.

Your hostility only proves my suspicion that you’re not debating in good faith. Be nicer; act with decorum. This is not 4chin.

And your lousy argumentation proves it even further. If disabling mules it to be unpopular amongst the playerbase, then server chains like SOD wouldn’t exist. All of their servers have mules disabled, yet somehow are all within the top 300 on battlemetrics (with the exception of their Yukon server) and all fill up during the day.

And now you’re picking up from where WARCORP left off. I am sorry, but the concern of development time is not a legitimate one when it comes to adding two lines to a server config. Two. Lines.

The most work that could ever come out of this is rigging the construction spawns to server settings, and even then that’s the optional part of the deal, with the main one being disabling the crafting of the Horde Beacon. It was literally a feature previously added into the game - you couldn’t craft the Gyrocopter or the Makeshift Raft on any map but Hawaii, back when it was Curated.

I’ve already compiled the facts as to why the removal of the Horde Beacon would be good for the game’s health; it would be appealing to those looking for a more chill experience, one with less raiding. You’re completely dismissing all of my points and going “well I THINK its not gonna be popular”.

In the wrong way? If I really am misinterpreting your points and there is some misunderstanding going on, it might have something to do with how little you care about explaining yourself. You’re not writing with ink that costs money - please put a bit more effort and actually elaborate your points.

This is not 4chin.

yeah it’s not, I’d call you much worse if it was

it would be appealing to those looking for a more chill experience, one with less raiding.

why would we want to appeal to the minority while dissapointing the majority, and don’t give me the ‘‘ohhh how do you know pvp players are a majority’’ five seconds in the server browser will be more than proof 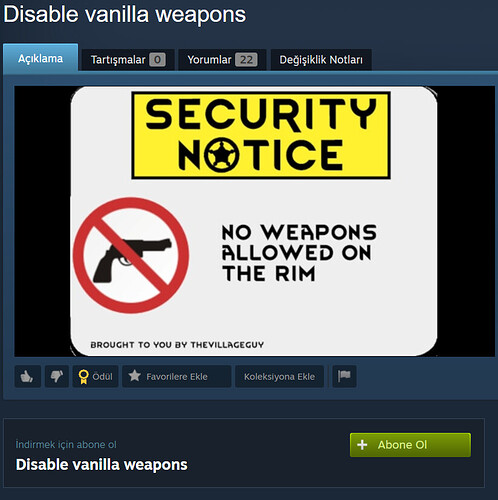 this is a mod for rimworld that removes all guns from rimworld. if you want to do a medieval playthrough, or have enough modded weapons that you don’t want vanilla ones, you use it. and there is certainly a minority that wants to use it, seeing how people do actually use it. does this mean the developers should flat-out remove all vanilla weapons from the game? no, it means that, while this appeals to a minority, it is definitely not what the majority wants.

majority in our case wants to farm horde beacons, and they would be displeased, to say the least, if we were to go ahead and nerf horde beacons.

you’re also assuming a non-raiding play loop is objectively better, when the opposite could be said and be equally valid. why shouldn’t we buff horde beacons, since it shortens the time between raids?

WHAT LOL where is a honeybadger on Yukon

majority in our case wants to farm horde beacons, and they would be displeased, to say the least, if we were to go ahead and nerf horde beacons.

I agree that nerfing horde beacons would bring some benefit to the experience of most players in Unturned. Keeping your bases for a longer period of time is something that I think a lot of players would like. There are a few good ways that I think you could nerf horde beacons without outright disabling them. One of the main issues with a setting that disables horde beacons is that it conflicts with quests on Russia (and other maps?) that require you clear a horde beacon to progress through the quest. It’s not a huge issue, but it’s undesirable.

I think the biggest issue is the scalable loot. For the same cost of a horde beacon, a large group of players (who are already advantaged in combat and loot) will get significantly more loot per horde beacon compared to a small group or a solo player. This is unfair. Groups do have to slay more zombies, but the cost to make a horde beacon remains the same. Making the loot consistently the same for anyone doing a horde beacon is a good first step.

I would also like it if horde beacons were more risky. If an orange beacon of light were to appear in the sky right where the horde beacon is placed (similar to the white beacon at the end of the Mk II. quest), it would call attention to everyone on the server. Players completing horde beacons already had to consider players countering them, but now there would be a much greater risk of players attacking. I think this would cause groups to farm horde beacons less often, and make it more interesting with the real possibilty of counter-play from other players.

A final, smaller solution would be to change the crafting recipe. I would make it cost a portable generator, a spotlight (for the beacon effect), 2 raw explosives, 2 chemicals, a detonator, and a blow torch. This makes it a little more difficult to obtain and encourages more looting of construction zones.

Any one of these changes alone would be helpful in nerfing the horde beacons without killing their appeal. For the players seeking faster raiding there are always the 10x loot servers and so forth. For everyone else, I hope that this would increase the lifespans of many bases, and make raiding more rewarding by requiring more preparation to execute.