New mod, & one of (if not the first) the first mods to ever utilize spawn overrides 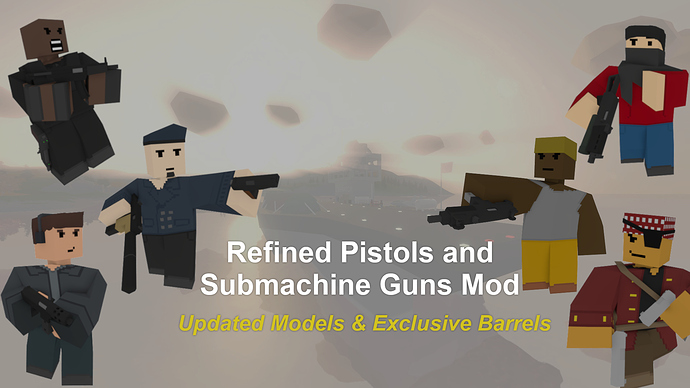 Refined Pistols and Submachine Guns is the mod that’s goal is to improve vanilla weapons, both with new looks akin to those that were released alongside Germany, & overhauls to how they work in-game.

This mod features many changes done to MOST pistols & submachine guns in vanilla Unturned & making them more viable or reworking their performance. and of course, this mod comes with new items to accompany the refined vanilla content too. The mod will have 3 major updates in the future, which will feature more weapons & attachments.

Here are some of the changed weapons in this mod.

It comes with a separate spawn mod that actually overrides vanilla items, with it, this mod is one of (if not the first) the first mods that use this feature. It replaces all pistol & submachine gun assets to this mod’s modified items, entirely. This add-on will soon support future mods that do the same, so expect more refined items from me in the future.

Keep in mind though that this spawn add-on is still on the works to become organized & with detail, please take it with a grain of salt.

Oh, and once I move from the development of this mod, I will open commissions for you guys to request me anything. So keep in touch when that time comes.

Cool mod, I remember when you posted about the remodels eons ago. The use of spawn overrides will surely be interesting.

(Also nice to see you again!)

Nice mod. I’m waiting for an update for assault rifles and snipers.

That is in my to-do list after this mod is complete. It might not be soon as you think, but it will eventually be worked on.

I will wait patiently.