I guess I’m late to the party because I’ve never used the forum ever before, so hi! (Some of you may know who I am already. I am the founder of the Unturned Trading discord server. https://discord.gg/sZDrPkPyfQ) I am here to announce that I will be creating a new Unturned Trading website (Link to prototype version: https://unturnedtrading.wixsite.com/unturnedindex) and I would like to see the community thoughts and feedback on it. I will also be announcing updates on the site through my discord server which I linked above. If you have any questions or what to give me some suggestions for the website please private message me on discord or steam. Thanks!

it’s a fundamental issue, because 90% of mythicals are just dumb shit and ugly like a shitty effect on a cheap looking skin on a niche af gun like a yuri or something

Unturned trading is REALLY scuffed tbh. Not enough traders and values are so subjective. When I did a big opening and wanted to display the value in the video, I asked 6 people that people told me were good and experienced traders. The result was shocking: 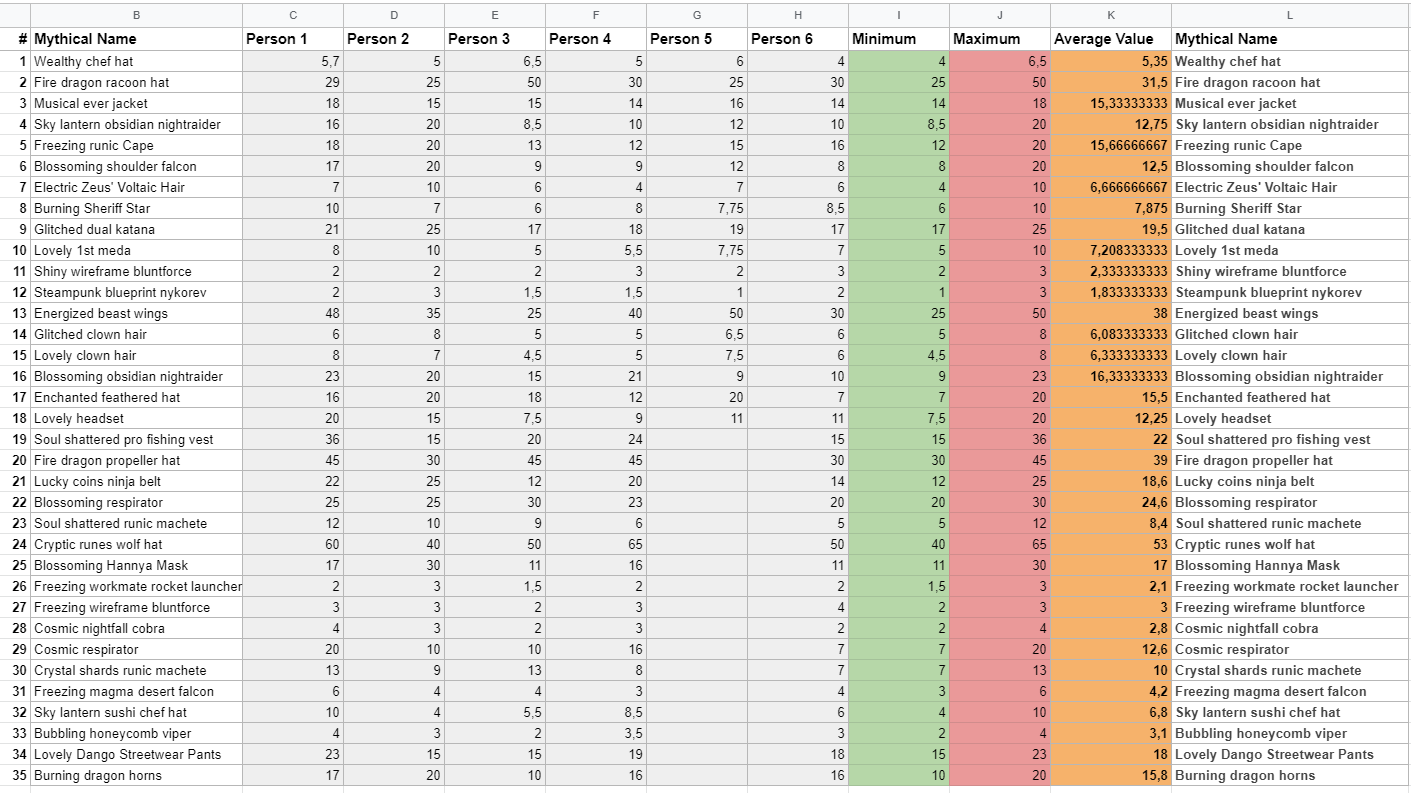 If there is something such as a website with values than it would have to onvolve a lot of different people to give their input and then get a average value similar to the screenshot.

I was a bit into trading for a while and just scratched the surface of it, but it just seems very messy and everyone gives their personal opinion on a mythical to determain the actual overall value.

Then there is those “chinese collectors” that apparently overpay all the time, so now you also have to take these in consideration. Do you have contact with them or not?

it’s a fundamental issue, because 90% of mythicals are just dumb shit and ugly like a shitty effect on a cheap looking skin on a niche af gun like a yuri or something

This. I’m not spending money on a purely cosmetic item lmao. Same reason I got out of TF2/CSGO trading so soon after starting, they don’t provide anything other than ‘ooo shiny/rare’ which I don’t give a rat’s ass about.

Not enough traders and values are so subjective

i think this is because there’s just too many possible mythicals you can get from one case. in csgo for instance out of one case, there’s only around a dozen knives you can get, mostly less than a dozen. with unturned there’s more than a dozen of mythical skins for once, then combine that with all the possible effects. i dont know how many mythical effects there are but i believe that’d mean there are at least a hundred possible mythicals you can get from one case typically?

This is true, I do feel like mythicals (Especially skins) have way too many variants. Thx for the feedback.

I understand what you mean about pricing being open ended and uncoordinated, but that exact problem is what I’m trying to solve with the website. I also see the website as a way to make trading more mainstream and coordinated like you said. If you have anymore feedback I’d love to hear it. Also, could I get access to this spreadsheet of yours or a copy of it, I think it could be useful. Thanks man.

Exactly. On the one hand, it’s nice to have that many variants, something for everyone. But on the other one its a pain for valuing the skins. I really hope Unturned II will have gun skins, but no Mythical effects. They could possibly have conditions like in most games.

Man, your idea is a waste of time, I understand that you are a super businessman and you want to earn a penny from student transactions that are spent on skins. But the reality is that the relevance of Unturned skins is lower than that of the dead TF2. If you want to make money in Unturned, then you are in the wrong place, any normal job or even a part-time job will bring you more money, even if you keep a large game project that will sell a lot inside game content (which not so long ago, Nelson threatened to close )
The main thing is not to be a lycimer and do not rub a fairy tale on me that this is for and for the sake of people - this is nonsense and lies.
If you want to make money in games, look for other alternatives, unturned is not a profitable platform for making money

Even though I slightly agree with wanting no mythical effects, I think there could be a better way to implement them unlike Nelson did in 3.0. (Having them on cosmetics only would be cool, or making them limited time effects (Like the Auras recently) would probably help to stop the overinflating of stuff.

I completely agree that trying to make a living off of unturned is completely nonsensical. I just do it for fun. Plus making a website is pretty fun especially since I’m going into networking/programming for a career.

Also may ask what a Lycimer is?

Лицемер - Litsemeriye - Hypocrisy - a moral quality, consisting in the fact that deliberately immoral acts (committed for the sake of selfish interests, for low motives and in the name of inhuman goals) are attributed to a pseudo-moral meaning, lofty motives and humanitarian goals