I ran into the NPCs some and noticed that they wouldn’t shoot me while I was in the car or if I was standing in certain positions around it. 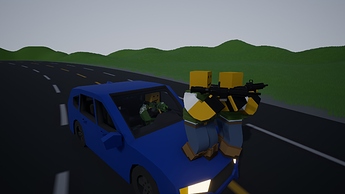 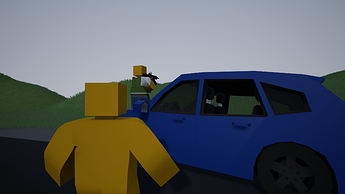 It’s probably because if you were a real person trying to shoot somebody you wouldn’t be standing on the hood of a car.
Also, another reason could be that they’re too busy with buttsecks trying to pathfind or something with detection.

If you go in front of the car they may consider shooting though.

That’s an interesting way to put it

Ha! I didn’t mention them in the update notes because they are stupider than the 3.0 sentries at the moment. This is a funny case - we’ll probably need some AI logic specifically for when on a car.

The difference is, with a sentry it’s logical to sometimes put them on a car.
I’m not sure about humans.

Mounted gunners, lunatics, riding in the bed of a pickup because why not.
Also for uhhhhh. . . “tactical” manuevers.

Well yes, but I meant placing them on a car.
“placing”.

Slap a child onto the hood of a car, give him a PKP and make a living sentry.
The only issues with that are

You can use them as sentries against other players.

You can use them as sentries

the child or the bandit?

i thought by hood you meant something else