So weapons can be stripped down and fully disassembled to a handful of parts, and since weapons in 4.x will be more realistic, so I feel the process of field stripping and assembly should be more in-depth (but still simplified)

Below are some edited photos of a basic handgun(Glock) and rifle(AR-15), showing them broken down into their main Upper and Lower halves and highlighting main parts. Most internal parts will require a breakdown to remove and/or replace, while some parts do not. This will vary from weapon to weapon. Some parts are only compatible with their respective weapon, while others are standardized across multiple weapons.

Discuss your ideas below about the system 4.x should use and how it should work. Try not to focus too much on how specific weapons should work, our main focus should be the basics of this kind of system.

My mother was a gunsmith… waits for confused looks to pass … Most (nearly all) firearms are not cross compatible.

Unless they were manufactured with the specific intent of having swapable parts, the best one can hope for is them using the same calibre and cartridge size: 9mm parabellum for example, .45 ACP, or the NATO standard .223.

This is handled nicely (if somewhat simply) in Unturned 3.x as until you fill mags most ammunition is generic within a range of possible calibres. Civilian ammo magically transforms to match the magazine, and firearm for which you load. in reality this includes .22 (short or LR) up to .45 (ACP) calibre.

Proposing an additional layer of part swapping system for handguns and rifles beyond the magical calibre changing attachments (silencers, muzzle brakes, retooled barrels) which already exist as aftermarket add-ons in 3.x is unnecessary complication in my opinion.

As to repairing… I don’t want to play at fieldstripping weapons, I got enough experience doing so during my 12 years in the Canadian Forces.

Cleaning/maintenance of weapons and tools should be fairly simple, like the wearing down of durability and repair system we already have. It’d be nice if there was intermediate repair options that restored a percentage of durability. For example: Gun cleaning kit + gun oil + less than 100% firearm = +25% durability [max 100%] or something. The all or nothing approach doesn’t scale material requirements to amount of repair required currently. The same argument is applicable to crafting food or anything with less than 100% condition materials (1% chesese + 2 x 1% bread = 100% grilled cheese sandwich) - and is probably better addressed in a re-do of the whole crafting recipe system.

Already confirmed. Nelson already has a picture too. 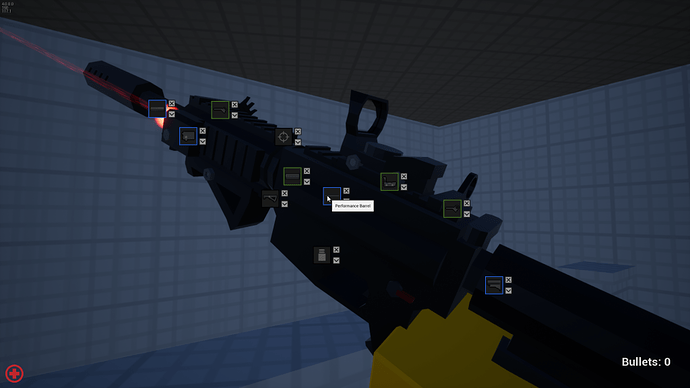 It seems to be broken down into barrel, action, and stock

This could allow for a more immersive animations of cleaning, checking the chamber, and unmasking the weapon. But this would be pretty tedious in my eyes since you have model ever part. Edit:if you mean by how eft is like.

Thank you for serving.

Now, not all barrels are cross compatible, but i do believe that the stocks can be switched.
However, I would like Nelson to disallow guns to function if the barrel, trigger, bolt, or charging handle were removed. At the same time, add intense debuffs the gun when the stock, handguard, or muzzle is removed, such as increased kick and/or decreased accuracy

It would be better if the parts just pop off the gun with the sound effect of a drill or pieces of metal touching. With the presence of a tool, of course. For ease of coding, developing, and gameplay
Like, you can’t remove the AK stock without a screwdriver, or a specific tool of some sorts

How would you guys feel about:

thank you all for sharing your ideas. And yes, I’m aware nelson has a post already about gun modification, but I kinda like a little more depth, most parts shouldn’t be swapable on the fly… also, because I want the ability to service and clean your firearms, but not the ability to outright repair them.

(also, if a gun has a buffer tube, if you take the stock off, you still have to have the buffer tube on, otherwise bad things)

I don’t really like #1. Plus, if you’ve got access to a CNC mill, then it’s not makeshift, but professionally home made, which could be possible but I doubt he’ll add a CNC machine.

#2 is possible, but limited. Casting bullets will only get you basic lead rounds. if you want jacketed rounds with an optional steel core, you’ll need to make lead wire and have a seat of swaging dies and copper sheet to make jacket blanks from. Also, this means that ejected shells will need to be recoverable… think about what will happen to your game when you finish unloading over 200 rounds.

Also, this means that ejected shells will need to be recoverable… think about what will happen to your game when you finish unloading over 200 rounds.

Raking brass after a day on the ranges is another CF memory I could go without. Extra fun in rain or snow.

Being able to craft virtually military grade guns from raw resources as if this is some unrealistic sandbox?

Okay then what do you think a good endgame is? In 3.0 there isnt one because of how common guns are. Is your idea of a end game just making guns rare so that the mid game lasts longer? A survival game is about proggressing to being able to sustain yourself, not to crawl starving and dehydrated from a military base back to a town over and over? Thats what the end game should be, rewarding people who do a dangerous grind until they dont really need to after multiple, 10 or 20 hours of grinding to get a inferior gun that is expensive to recreate.

Except there’s just one problem with that.

Good progression does not involve grinding, as grinding is a lazy way of spacing tiers of progress.

Good progression means that there are enough game mechanics (and, in the case of Unturned II, difficulty in the survival aspect) that, rather than just monotonously performing a similar task over and over, you’re actually experiencing the game as a whole. Games that fail to do this often just put a massive grind wall to separate endgame from early game, and it’s incredibly uncreative.

Sure, there are a few exceptions, but for the most part,a grind is the last thing we need. And your example of Rust isn’t any better, since Rust is notorious for the grind of collecting resources with a few monument loot runs and barrel farming thrown into the mix.

Progression is good, but there really isnt much of a difference between progression and grind, you look at maps like russia, which is probably the only map with actual progression, and you need to grab a gasmask, which you can only get by killing zombies and looting firewatch. You need to grind to get the gas mask by killing zombies and re looting the place over and over again. Also realistically how many layers of progression can we actually get without seeming weird? I guess you could have areas only accessible by hazmat suits, but if you use special zombies like the fire and spirit zombies in 3.0 it comes off as extremely artificial. There are only so many good progression mechanics you can add to a game before it becomes a grind.

If you’re using 3.0 as an example, I’m obliged to bring up the complete lack of challenge in the survival mechanics. Hungry? Just hit the local grocery store or farm for infinity. Wounded and being chased by zombies? Just stand barely outside the town and laugh it off.

Of course now you’re going to complain about a grind, because there’s literally no survival progression. Staying alive is incredibly easy.