In a survival game, you expect to make the things possible with the resources that you have, things like guns, medicaments, grenades, bullets, your base, etc… Most parts collected and made by you or your group.
A game possible to survive and evolve just looting and don’t making more anything done is a survival game than worth it. Not have a progress system its frustrating.

1 - You research a BP of a wheel. to get the BP your job hard to do, but now your group and everyone than touch in this BP goes can make this wheel if had the BP in hands. in other words, your research is an object. like the wheel than you pay to make this BP.

2 - Now to do one wheel you go need the material to do the same.
(Wheel-BP + Material + tools = Wheel Object)

Some BPs go be impossible to make, have a lifespan based on uses, weapons, and items extremely sophisticated (Legendary items) than get a good advantage above other groups go have this system, for example, a turret more precise or with more distance, maybe a blueprint of a car engine or a gadget than break and open walls in silence etc…

This BP loses your value per use. for example
if the bp had 10 uses normally drop 500 fragments if destroyed if you use 5 times go drop 250 fragments.

Simple, if your team had much BPs everyone goes focus your resources against your team with the intention of picking up such resources (BPs) that balance the groups inside game and turn game more hard from huge clans because its more normal the same show your items researched in one hour or another, how everyone expect to get power to raid and give fear from other groups.

How make to research items?

Before everything, you need a research bench a machine with slots to an Item, to place BPs fragments and a clock with time left to finish the research.
From evicting huge clan advantages researching many things at the same time need to be impossible to place two research branches in the same claimed area. in other words 1 bench to 1 base.

The item their pay

you need the thing then you need research in hands

The price their pay

you need to collect blueprint fragments, fight against zombies or same another player to get this thing, it is common to find killing zombies in low quantity, In spawn places (structures on map) in medium quantity depending on the place or/and in airdrops and another event appear in large amounts.

The time their pay

Depending on the rarity of blueprint go demand more time to research, but i no have idea of a just value from the same.
go be configurable by server owner.

Hello ladies and gentlemen, my name is noobyfish, I will be your tour guide today.
Here you can see the weekly rust suggestion.

Rust blueprints are tedious and collecting fragments to make blueprints would be equally, if not more tedious.

I’m not going to loot seven locations and kill fourteen Turned just so I can craft a car part, and if you’re sensible then neither should you. Farming and looting should feel rewarding, not repetitive and tedious.

How about you make this a mod

this has been suggested in previous threads. If you want Rust, play fucking Rust. 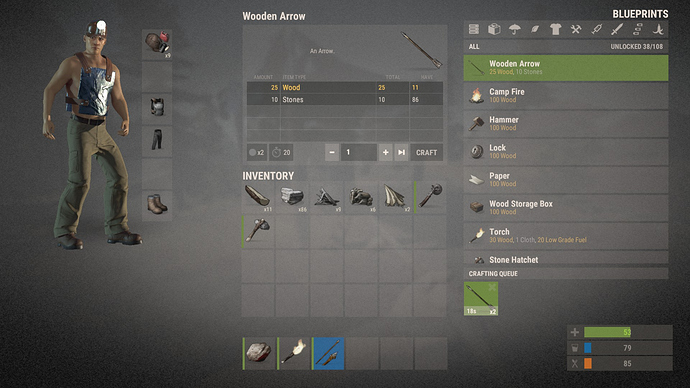