Add a streak of blood. Which will gradually recover if the player has 70-100% hunger and thirst. Or use a blood bag.

Each weapon has: damage, + bleeding on impact, a chance to break a part of the body. 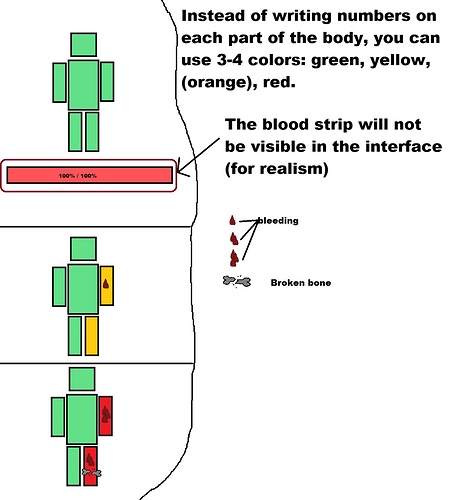 Sounds a little complicated. I like the diagram you built. I believe nelson brought up an example of this because he didn’t want players becoming crippled when someone sprayed at them.

I do however like the idea of melee weapons having different characteristics, more bleeding or braking of bones.

Would also be cool if you could sharpen blades or apply poison for additional damage (or to arrows).

The only thing I do not like is the separate health bars or blood streaks foe the limbs. I like the simple idea of having a single health bar.