Red Dead Redemption 2 is coming to PC on November 5! 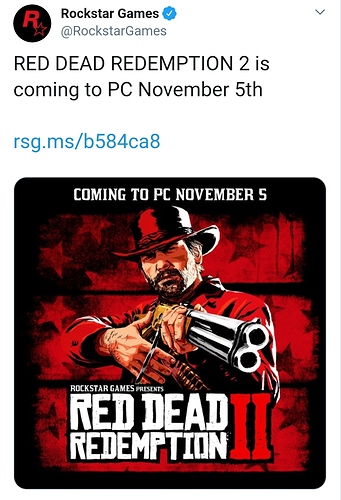 A shame very few Unturned players’ PCs will be able to run it.

Oh boy I can finally play it

My CPU and RAM:

I might be able to play it. I’ll let you know how it goes.

Just a random think I heard from Brian on one of his streams.

oh fuck yeah, i might buy it if the multiplayer is good (i’m not paying for playstation plus to use it on my ps4)

At launch, the game will also be available via the Epic Games Store, Greenman Gaming, the Humble Store, GameStop, and “additional digital retailers” with preorders starting on October 23rd. Steam, meanwhile, will be coming on later: RDR2 will launch through Valve’s store in December. The game will also be a launch title on the Google Stadia streaming platform in November.

Looks like I will get my hands on it in December.

you need a beast to run this thing