But right now, I want to talk about the Rio map. It’s been a while since I’ve last actually played the game, but I still sticked with the community (mostly), and after checking out Elver and California, I’ve decided to revisit my Rio map, a year after it’s original release. 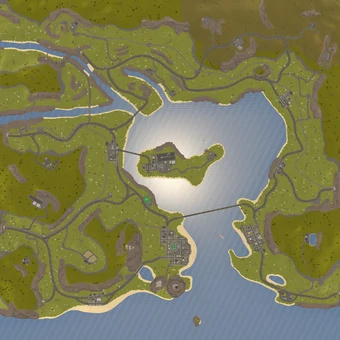 The map was originally approved for curation a week after France, as a timed curated map, this meant that it would go to the workshop as soon as the 3-Month period was over. However, due to changes in the Curated system, we had to release Rio on the workshop, with it being featured on the game’s main menu instead of being added to the game’s files. It was intended as a way to make the game less heavy on storage and so we could update the map easily, but that didn’t work out well as there was no auto-subscription to curated maps at the time, so the map was kinda ignored in comparison to maps released after it, specially since auto-subscription was added after Rio’s release.

For example, Elver, Danaby’s most recent map, currently has 906,259 subscribers as of August 21th 2020, France with 543,814 and California with 424,851. Rio for comparison has 216,551, almost half of California’s subscriber amount. This means Rio is the 5th least subscribed survival curated maps, with Ireland, Cyprus, Carpat, and Belgium behind. I could be exaggerating, but this makes the map sound like it was mostly ignored, and/or not properly advertised.

The map wasn’t really the best either, sporting a Russia-like progression (basic loot south, good loot north), reused Russia assets (i.e. gravel texture and military buildings), emptyness, and poor optimization (the notes had mesh colliders!), but the biggest crime of Rio is having unused NPCs, I’d say… so I wouldn’t blame anyone for not playing the map as much as they played other maps.

So yeah, in short, the map wasn’t very good.

And that’s precisely why the Rio team and I have decided to rework the map entirely, going from assets to the map itself!

This will be the first and last major update the map will have, so we’re hoping you can give the map another chance once the update is out. This might not be as exciting as the announcement of a new curated map, but we really hope it makes it much more enjoyable than what the original Rio offers.

We’re not sure when it’ll be released, but we expect it to be ready by the end of 2020.

I do agree that Rio may have had a rough time with the interim changes of the curation system. While Rio originally released during a period of time that I was mostly on hiatus from Unturned, I certainly look forward to what’s in store for the updated Rio. Definitely going to keep an eye on this one!

and remember, come to Brazil, or else Brazil comes to you

i have played every curated map except this one, i hope to see it updated

Honestly, I am more excited to see this than a new map. Rio really didn’t deserve what it got. Yeah, it wasn’t the best but it didn’t deserve to be forgotten. I can’t wait to see what you guys come up with. I’ve been out of the community for a while but I’d love to make another trailer for the rerelease. There’s a lot I’d change about the first one but it was a blast to make. Good luck, maybe I can finally finish the jaguar too.

I’m going to be honest right off the bat, I’ve not played the map, but now that I look at the GPS image, it has a very interesting layout and I’m starting to regret not being subscribed to it.

I’ll probably give it a shot soon lmao

Anyway, it looks like you guys are jumping into an arduous project, best of luck!

Just make a new map honestly.
Learn what your team did wrong for Rio and just make something new, something fresh.
Don’t confine your creativity to the same project for an extended period of time.

@FlodotelitoKifo Does this mean you’re also going to update the flag mod? I’d honestly like that, if I am to be honest.

I’ve been wanting to make it a masterbundle too, so… probably