Recently selecting “Bake Map” in the editor doesn’t seem to do anything. When selecting this option there is no wait time like usual with baking, instead the button is pressed and nothing happens. Checking the map files shows no additional change to the map. This is a problem that had persisted with charts for a long time but now seem to be happening with the satellite as well.

I have also had another developer of the map try to bake the satellite without any success. And reverified game files. Any insight into this issue would be greatly appreciated!

I am currently unable to recreate this issue (neither the described satellite bake problem, nor the implied chart bake problem).

It seems to work fine on base game maps, but trying to bake my modded map causes issues. I will say that my map is insane sized so it might be related to that, but the issue just started recently.

I’ve had this issue too, and putting in the ‘-NoPreserveMissingObjects’ line into your game’s Launch Options should work. Drop it in before you start your game, load into the map and try baking your satellite. Hope it works!

Thanks I’ll try that now.

Update: Seems that running with -NoPreserveMissingObjects has not resolved the baking problem.

Just to make sure, you’ve got it put like so in the launch options? I.E a space if you have any other options? 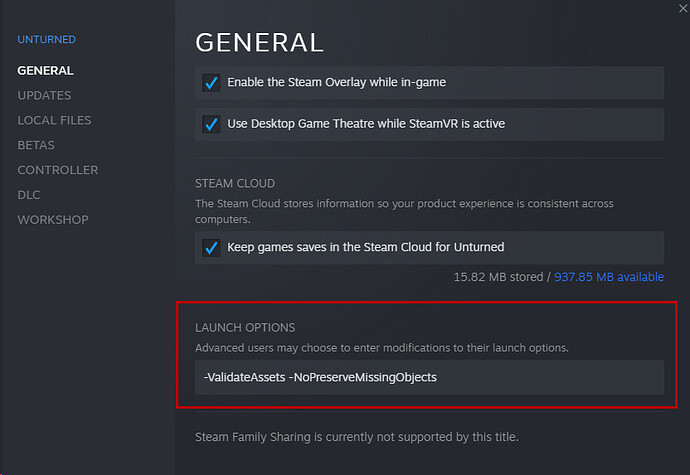 A couple of things to note for this is that I’m on the preview branch of Unturned (You can opt in through the ‘Betas’ tab, so this may be something that hasn’t been sent out to the base game yet.

That worked! Thank you so much!

Turns out I did need to be opted into the beta, once I did that it baked. Chart still isn’t baking but that’s no problem since I make a custom chart from the satellite anyway.

As an aside, do you know what exactly causes these errors? I’m worried it’s from too many objects because my map isn’t even close to done and I’ve ran into weird issues from too many nodes and stuff like that in the past.

From what I’ve seen it’s something to do with the game trying to find a missing/null object, that line that was added removes them if they are ‘missing’.

For the sake of relevancy, the GitHub issue that I assume you’ve seen: Unturned Editor Satelite baking not working. · Issue #3089 · SmartlyDressedGames/Unturned-3.x-Community · GitHub