Currently experimenting with some different styles, so I decided to make a stereotypical zombie movie poster. 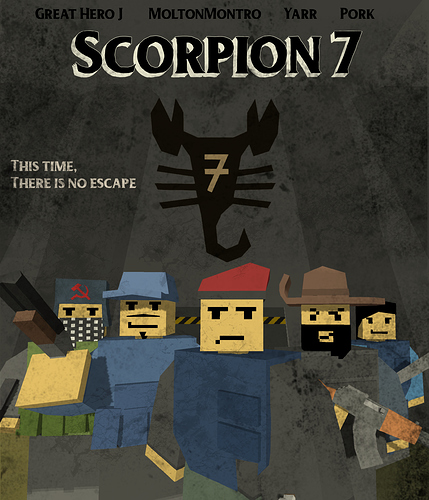 The 1994 movie Scorpion-7 was an interesting, but ultimately unsuccessful, experimental horror film. The movie takes place in a locked-down facility, and uses this heavily; claustrophobia is a major theme in the film. This is also due to budget restrictions; due to it being a risky bet for major movie studios, the movie was tragically underfunded and as such did not have money to spend on a large expansive set or expensive CG effects; as of such, the film would not seem out of place in an indie film festival. However, the acting is a strong point of the movie; the actors do genuinely seem scared of the ever-lurking threat of the released bioweapon. The delivery falls flat in a few places, however, and when combined with the low production value the flaws of the movie are painstakingly obvious.

Due to the experimental nature of the film, as well as the subtle political overtones, many theaters did not show the movie when it was released. It failed heavily at the box office, but became a cult classic over time via DVD and rental sales; because of this, it eventually managed to recoup the slim budget of 2 million dollars that was used in producing the film.

Overall, I rate this movie 7/10; while it does have moments with some obvious issues, most of the time it is a genuinely scary horror movie.

it is a genuinely scary horror movie.

Can I find it on Ebay?

I like this a lot damn dude this is nice

Whats up with you constantly make posters of yourself, GHJ, Molton and Yarr?

That’s some gay shit if I ever seen it.

Man, this takes me back to one Friday night when I used to live in the States. It was really cold that evening, and I had the house all to myself, so I asked a couple of friends over to watch some movies in the living room, drink some hot chocolate, all that good shit. So I went to my local Blockbuster with my friend, Collin, to catch some new releases like The Lion King or The Flintstones or something, when suddenly he points out this movie tape with a really dirty-looking cover and five armed men on it. We read the description, and we were instantly intrigued. I’d never watched this type of “apocalyptic” film before, and my dad used to never let me watch horror movies, especially after 8, but I figured since I was home alone I could see it with my friends and then bring it back next morning so no one would know.

So we rent it, went back home and after everyone got there I stuck “Scorpion 7” into my VCR. I did not see any of it coming. It started off thrilling, our main protagonists running away from something that had gone wrong, and was now getting nearer and nearer. I still recall two of my friends hiding under the blanket only five minutes in. I hadn’t watched many violent films before, but I was fine with the bloody/gory moments in the beginning. It was only what came after that got to me. Those scenes in the facility hallways with the heroes screaming for each other were terrifying! Couple that with the scary growls of the zombies coming from all directions and the horrifying make-up of the disfigured infected, it was just about enough to mess with my 8 year old brain. What broke me though was that one scene with the spitter around two thirds into the movie. You know which one. I remember having nightmares for weeks after watching that piece of crap. Needless to say, I was now aware of why my dad had forbidden me from watching stuff like that.

Me and my friends couldn’t watch the rest of the movie, but I heard the ending was mediocre anyways. We weren’t able to sleep that night, so my father caught me and grounded me for a week after that.
I must say I really loved that movie though. It’s what got me into horror, and it had really convincing acting. But eh, the critics like to claim otherwise and I just don’t see why they think it was that bad. It wasn’t, unless, of course, I remember it through nostalgia glasses.

I thought about going back to it one day, but I decided I’d rather have it stuck in my mind as a pleasant childhood memory, than risk realizing it was never that good. Would still recommend it though.

I heard the son of the director (who tragically died in 2012 at 74 years old) inherited all of his filmaking stuff, including a script for a prequel to Scorpion-7 named “Scorpion-7: Origins”. To uphold the legacy of Scorpion-7, the son said that he’ll make a movie out of it and it’s currently being funded on Kickstarter.

He shared a description of the script: “Scorpion-7: Origins (The name is quite cliché, I must admit, he says) is a prequel to Scorpion-7 that shows what happened in the facility before the original group of survivors arrived there. Just like the original, SC-7 Origins will focus on claustrophobic environments, but instead of following a single group of survivors, it will follow multiple opposing and allied groups through the vents and overrun facility of Scorpion-7. We will see how the facility has fallen from the hands of Scorpion-7 Corp. and then the chaos that ensues. With scientists of high importance evacuated, the virus spreads through the facility consuming the numerous human test subjects as SC-7’s PMC tries to retake the facility by purging survivors while an opposing US Government assault team sent to investigate tries to contain the outbreak and retake survivors. To add to the tension, a new, more powerful threat resurges from the depths to terrorize the last conscient things left. From what I can see, the script was written around 2005, and my father noted that he would like to thank Video Kamnedandesu, the famous Japanese director as inspiration.”

If you ask me, it sounds like it would be very challenging to manage directing three constantly evolving points of view in a horror feature film that focuses on tension within only 1h45.