Who’d like a server rating to be in place, similar to Roblox’s experience rating system? It seems like a cute and harmless thing to add in.

maybe a person can create a website with unturned servers, you can view details about the server and see comments and ratings

Then there’s those servers that constantly ask people to vote and stuff and provide in game rewards. I think it’s best if there’s a system that the server owners cant track the details of, only the rating itself. Besides, such sites would probably have ads.

Are you suggesting that for UI or UII ?

I’m aware of that, but as the game isn’t in a state of having servers whatsoever, OP could be referring to the current game, wouldn’t be the first time that users don’t use the right categories.

I barely see you have a constructive discussion, in the last 2 days or so, you’ve only really replied to my posts and you always seem to cause all focus on the main topic to break down or you seem to start petty talks with jabs.

Get out of my posts, you’re toxic and useless for them.

all focus on the main topic

Because that’s the point ? I don’t see what’s toxic about my question, I’m literally asking for which of the two games you’re suggesting that.

I don’t take your presence kindly so politely GTFO and post on some other topics, I’m not going to argue what I see as clear to a brick wall.

You tell em fr all my homies thumbs down oyamaet. Stand against oyomat 2022

It seems like a cute and harmless thing to add in

Get out of my posts, you’re toxic and useless for them.

Bro, I…
He raised a very good question.

I don’t take your presence kindly so politely GTFO and post on some other topics,

Thats not how public forums work

Thing is that it could be easily exploitable for people to use bots do mass dislike or like servers, a problem which was prevelant in roblox before they cracked down on bot accounts

He raised a very good question

No he did not. Asking which game it is in when it clearly says Unturned II is not a good question, nor is it worth anybody’s time

Asking a question doesn’t warrant all that anger

Oyamat does things like this often. Ignore them.
They’re a drama junkie and they lace every one of these “questions” with small jabs.

I guess it could be a good idea, but the creator could just restart the machine and name it something else to clear the ratings 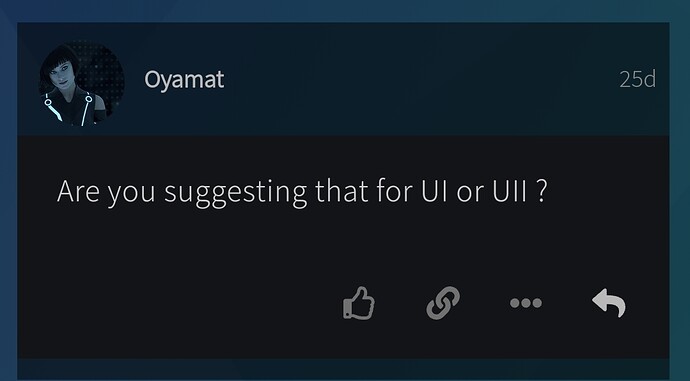