Here’s some concept art for skill trees (and the general styling of unturned).

Here is an image of the mouse hovering over survival in the selection menu. 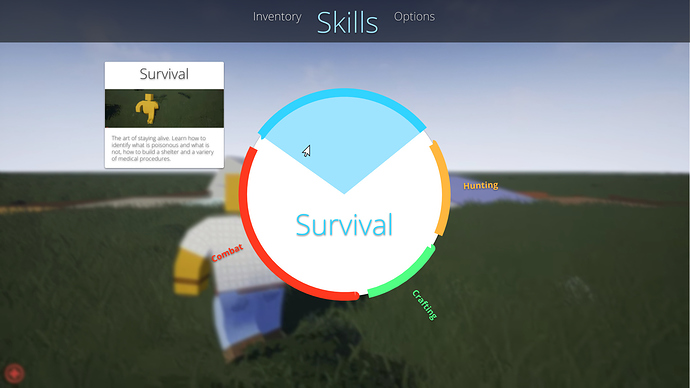 Here is an image of the Combat skill tree. 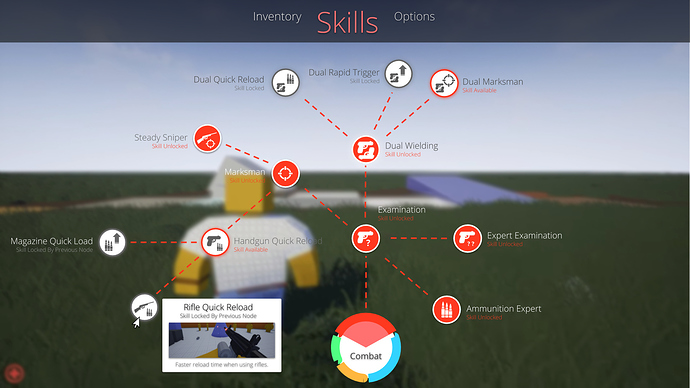 Let me know what you think should be changed, mainly about the layout.

I think you have played watch dogs too much…

It looks good tho

I like the Watch dogs like skill tree, but only thing missing is levels, so fe. Faster reload 1,2,3 and after unlocking each level you could be able to jump into the next “perk”

This is better than what we currently have so I’m fine with it.

Yeah i think this has been talked about a lot, and what I’m planning to have is a little box that comes up (after you have unlocked the skill) that shows you your progress.

Now for levels, I think that the current “exp” system is lacking a lot. Skills should be upgraded by (yet again watch dogs im so sorry but it works) skill points which you earn by doing the said task for example shooting guns and fighting.

After the user has aqquired enough skill points, they may chose to spend them on tasks they did.

I don’t really like the concept of skills in games. I’d prefer something like
GTA V’s system where doing said task slowly makes you better at it (ie shooting increases accuracy, reload time).

That’s kind of in there, the more you do something, the more skills about that thing you unlock.

But it’s still something you have to manually press. IRL, if I started shooting targets for a while, I wouldn’t press some button, I’d get better over time.

But don’t you press the trigger?

(ok i get ur point… maybe skill trees can be left as just a heads up?)

I really like how it’s done. Looks really good, not gonna lie, however, a lot have said that they want skills to be kinda like GTA V or Skyrim where you upgrade a certain skill after practicing it