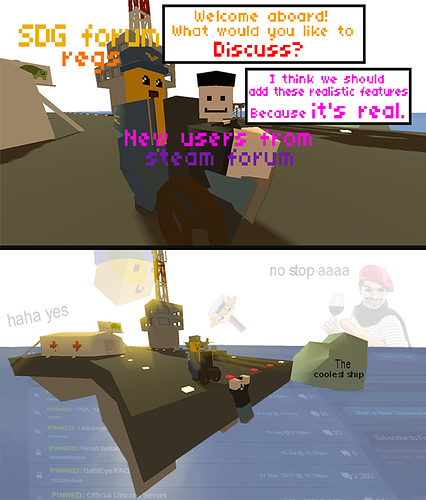 What’s the opposite of the like button? I wanna do that.

I feel the same.

If I could ever even suggest Nelson did anything wrong, it whould have to been the linking of the game directly to the SDG forums.

Things haven’t been quite the same since, this place felt safe and protected before then, houseing the best of the best…

Well, the illustration presented to us.

I miss the days when there used to be some good topics to in the Suggestion subforum.

I found this place not from unturned, but just browsing the main website. Xd

Hate when people be suggesting all this “realistic stuff” or ESPECIALLY WHEN PEOPLE try to compare Unturned guns to real life guns. Like I always have idiots classifying guns how they would classify them IRL but in Unturned it’s different. People would call stuff like the PDW a “SMG” carbine or guns like the Snayperskya a “sniper” cough sharpshooter rifle

What’s with that accent mark?

you found it. congratulations, you won 50 MILLION DOLLARS

captain sidney x laurence and then we can talk

i mean if i need to be brutally honest i fucking hate it when someone mentions an idea about something pvp focused, and all you 4.0-nazis shit all over them

You got your shitty-mic-kosing-blueberry spawn on one end, and on the other side of the spectrum you have all the forum-going survival nazis. get your heads out of your own asses, stop blowing away people’s genuine ideas and open up. Jesus Christ.

also all your memes are shit

You had me until you added that third one. (although I have to agree that the memes are indeed shit here)