Some more vanilla style buildings as GIFs and a campground 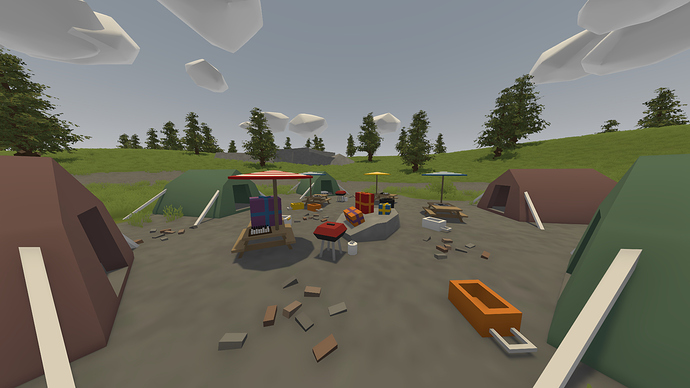 why are there so many bricks at the campground

Well I didn’t have that good of an idea what I could use to fill the empty space. Would love suggestions though.

I would suggest a large campfire in the middle rather than the typical lazy BBQ.

Why a large campfire? There is already a barbecue per table with exception of the ones in the back of the image which have one between two but have a different type of barbecue. How would I get a large campfire without a custom model or compounding?

What’s the problem with putting multiple objects together, as long as you don’t go overboard it should be fine especially for a campground which has little detail in comparison to the cities. Plus I’m pretty sure that Crypto has got connections to a few Mod Makers.

Its quite a lot of work considering I can not do unity for the life of me. I will give a compound a go but have no idea how to start it off or what to compound with. Also just say you instead of Crypto.

Had didn’t think that was you xD. I generally though it was Paladin or something, “just woke up”

There are fire nodes in devkit and some in mods now which you can mix with the new curated logs plus a few pebbles and stones.

I really like the stones at krovi on Russia. Will give it a go with them.

i dont think ive ever seen that in my life.

Oh yeah that buildings long gone! I am currently working on a larger gun store with a very small firing range and whatever. Should be done later today.

Hey Crypto you releasing those objects publicly, or are you whitelisting them?

You have not been around much then

I liked it gib rn xd