Unturned is a game played by all sorts of players, and their computers are almost as diverse. One of the problems i’ve had with this personally is I play on many servers, some of which are a whole lot more demanding of my computer then others. Switching every option manually is quite the pain, and i’d like to be able to switch how unturned looks with less than 60 clicks of a button.

1: A preset menu.
This option allows people to select what they want their options to be in two clicks.

Dropdown Graphics1319×549 12.2 KB
This means we wouldn’t have to click 10 or so times to get the preset we want. I find this to be one of the biggest problems with the config/option menu. To be clear, this would not replace the options, but it would be the top option (for ease of access.)

2. A dropdown menu for ALL of the options.
It’s obnoxious to click 15 times to get the option I want. Dropdown menus fix this.

This is the first bit of the UI i’d like to have changed.

Why? Most games of all genres have it, and it really is standard industry procedure. Especially since it would take at ABSOLUTE most half an hour.

I’ve seen a couple people say this in the few years I’ve played Unturned, but I’ve never actually understood where that mentality comes from.

Why would this be a feature when you can customize the graphics to your liking, you have to click a couple of things what’s so bad about that?
Plus if this was the way it worked then you couldn’t turn off bloom without having your ultra setting off.

He wants both. Not just this new thing.

What do you mean by

He wants what he is suggesting here, and what we have currently. It’s not that hard to understand. At all.

Think about it. He’s around our age, owns a huge, one-man business, don’t you think he’ll slack off every once in a while?

That’s just making assumptions based on your personal stereotypes of successful people.

Wait, so he can’t do it the next day?

What do you mean by

You can have presets while also having actual settings. You aren’t limited to just one or the other. The presets just auto-select pre-defined settings. Some games even have a button to auto-select what it thinks are the “best” possible settings, or the “best” preset, for your hardware.

I don’t understand why you would need to different options for changing, but to each their own

He explained why he wanted it. It’s faster than manually switching, especially when playing PvP and people would prefer minimal settings, when first playing and seeing what they can run, and for switching to maximum settings for a special screenshot or testing new hardware capabilities.

Switching every option manually is quite the pain, and i’d like to be able to switch how unturned looks with less than 60 clicks of a button.

To each their own

Making the ui in general easier to use really doesn’t merit much opinion.

I want the UI to be navigatable and quicker to use. Dropdown menus benefit those who like custom graphical options and those who would rather use presets. Clicking 10 times to get shadows on medium from ultra isn’t intuitive or time-efficient. It certainly isn’t hard, either. 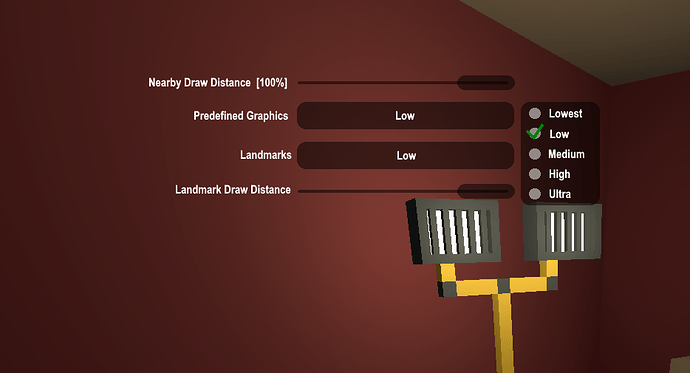