Well, taking a cover is not just a thing by crouching or crawling behind a wall.
Imo, there should be more animations on taking a cover and shooting. For example: 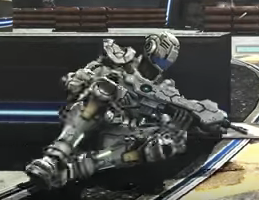 (Note: don’t mind the low quality screenshot)
It doesn’t have to be a short wall, we can also do it behind a sandbag.
You should be able to do blindshooting… err, i mean shooting without showing your head with less accurary and range, which will prevent you from taking high damage and get shot from the head but still allow you to combat. But it won’t be a great option because it will be hard to manage the weapon and it will cause more recoil even if you have max sharpshooter skill.
That can bring some cheesy third person kills, so it can be blocked by another option to the commands file in the server folder. If the server admin doesn’t want to allow this, for example, in a pvp server, he can just edit the commands.json text file and the perspective option in the server folder.

How would this work in first person only servers?

It won’t, probably. I ran out of ideas.

This does not really fit Unturned, the games that do these tactical cover systems are solely based on gunplay and nothing else.

Ok thats fine, I know in tarkov you can shoot over things by holding down a button and it works fine but its pretty situational. The only problem i see with this is that it would make a camping and hiding behind something meta even more prevelent, because sure you are going to miss most of your shots but its still free shots that you can exchange without putting yourself in danger.

red orchestra 2 had a cover system.

everyone hated it so fucking much they removed it for rising storm 2.