The inventory in 3.0 it’s a little op like you can carry an eaglefire in your pants?!?! That’s crazy so I wish in 4.0 the slots of inventory are smallers and the guns more bigger and with that I like to have speed system like when you have so much things in your inventory you start to slow speed. And that’s all I wish it’s in 4.0 please. (and sorry for my bad English.)

I’ve seen some very well-executed inventory mechanics from games like Escape From Tarkov. Basically, in EFT, for example, let’s say you have a tactical rig - the equivalent of a vest’s storage in Unturned. You shouldn’t be able to store a rifle within the vest itself, but collectively the vest should still have a lot of capacity to hold things. The solution? Compartments and separation. As you can see in the bottom picture of an example EFT inventory provided for reference, the “tactical rig” storage section has plenty of space, but it is broken up so it can only mainly be used to carry small objects such as magazines, bullets/casings, and small household items like keys or cigarettes. 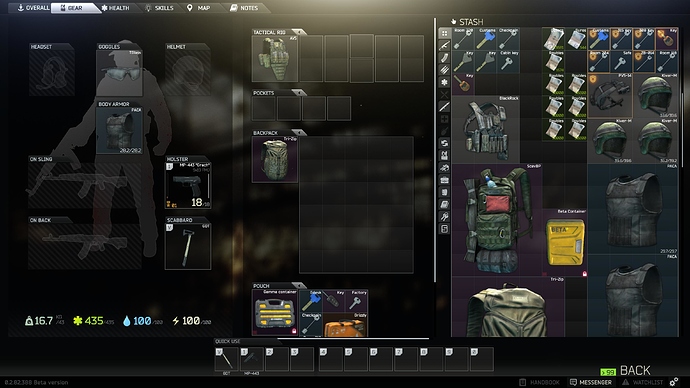 I think if done right, Unturned could easily borrow this mechanic and to an effective extent, since cargo pants can carry a lot of small items with its many pockets but can’t carry a whole rifle.

And @daslito, The 2.0 weight system and reduced inventory size kills this idea. It’s honestly one or another or else it kills the game. 2.0’s weight system worked because the inventory system was one slot per item, whereas 3.0 and 4.0 are planning for multiple slots per item.

I have nothing to say against this. This is exactly what would make the game a killer

This is what I meant when I commented on the 4.0 devlog announcement post

maybe with pants and shirt storage, it has separate areas so you can put big guns in them, like say you added a gap in between 2 storage areas int he pants, which represent the pockets, and for one, I like the all the clothing slots, makes your character amazingly “customizable”(does this word not exist??) and I will actually be able to make the character look how I want it to, so I think it looks good, though one thing, when you make the really sharps turns and the body bends so far, ugh sorry …

Oh yeah I forgot that