So, this update messed with the order of the map-menu displaying players and now displays them prioritized on their names, rather than the group IDs. One problem though. Now, using this menu you can’t even tell is a person on a team or not. It doesn’t matter if we are talking about a friendly or enemy team. Everything is messed up. Is that intended? I kind of want the old way back. Any thoughts?

Is that intended? I kind of want the old way back. Any thoughts?

Link to a somewhat-relevant relevant post on the GitHub repo: https://github.com/SmartlyDressedGames/Unturned-3.x-Community/issues/3052#issuecomment-1051130631

EDIT: Tagging topic as a suggestion.

I hope there will be that new tab with group info Nelson mentioned on github. Otherwise it is a useless update (in regard to the player list).

Otherwise it is a useless update (in regard to the player list).

To clarify: as stated in the patch notes and on GitHub, the change was made for performance/optimization reasons. This is especially important since the player cap now allows for servers to have a 100+ players.

There has been more interest in the setting than I would have thought, so I intend to see about adding a sort button at the top for switching between alphabetical and group sorting.

This hasn’t been discussed recently as there were other notable clouds changes in the latest game update, but a “sort by Group” button has since been added to the top of the player list. 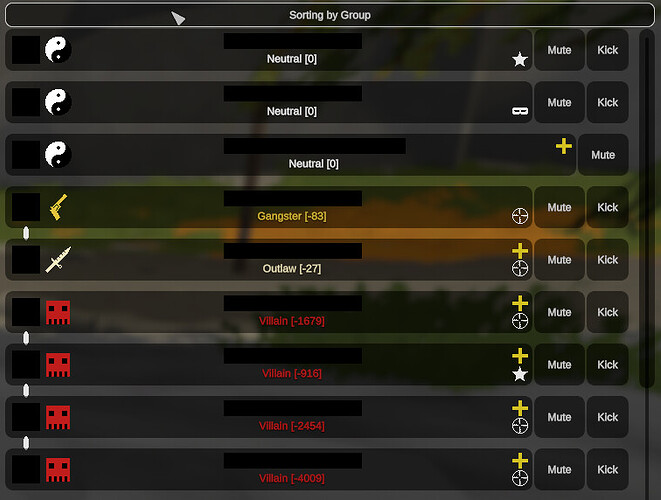 Thanks, I already know about and use this feature. One thing that annoys me is that there is no option to make this a default setting. Every time I connect to a server I have to go and enable it manually. Still, better than not have this option at all.

One thing that annoys me is that there is no option to make this a default setting.

Fortunately—this preference is actually saved as of the latest game version (which released onto the main branch this morning).