The Problems with Unturned RESPONSE

There’s trade offs for every anti-cheat out there. For one, Battleye is shit and Bohemia Interactive needs to fix the issues with BattlEye, but I’d prefer BattlEye over Vanguard ten times out of ten.

Anti-Cheats at the moment aren’t ideal because they have kernel level drivers. It’s not ideal but it’s necessary. The controversy around Vanguard at first is that it operated all the time. I think the best option would have Anti-Virus software block game cheats and hacks leaving people who choose to use cheat software vulnerable to attacks, because if cheats also start using kernel level drivers those also can act as root kits unless they’re using a virtual machine.

Another option would be for a cyber security company like Avast or McAfee to come out with an anti-cheat of their own.

im pretty sure unturned does have a built in anticheat and it basically makes the server check that a player’s movement isn’t doing something it shouldnt which i think stops flyhacks and that sorta stuff but on the other hand it causes massive rubberbanding for regular players. turning this off provides a multiplayer experience that is as smooth as a cylinder from the ireland map but it does allow hax0ars to get through and do bad stuff.

ohhh i thought that was my internet

3.0 also isn’t optimized the best though. Certain ways of doing it will be much better than others so there probably is a way around the rubberbanding we have seen in the past. One game that I’m testing tries to do it but so far hasn’t had any rubberbanding issues although the game is still in early stages in terms of overall content.

“nooo u can’t kill people thats not what the game was meant for! muh teamwork and socializing!”
“haha augewehr go BR BR BR BR BR BR BR”
in UII nelson can make friendlier interactions have more benefits, but the implications of that are way too complicated

Though on a serious note, this more or less suffers from the same faults that the video “The Unturned Youtuber experience” suffered from. It is based on a feeling that a lot of Unturned veterans are going through right now and that I can personally relate to, but it does so without anything beyond that initial gut feeling which prompted them to make a video. At the core is quite possibly a perfectly honest series of complains and personal disappointments about a game that the respective individual has probably invested a lot of time in, and that can’t be denied. Not to mention that, yes, some of the things said in that video are relevant, like the issues of BattlEye, whether they come with an obvious lack of resesarch which resulted in zman calling Yarrrrrrrr an sdg employee among other things.

The main reason I am starting to grow tired with these videos is that they are so long and barely really say anything new that hasn’t been chewed over and over like a cheap tasteless gum, coming across as rather preachy, when they come from an honest place most of the time. It pisses me off the way they are presented, without taking some time to think beyond what they already know. It’s like trying to pour more sticks onto the fire of comments saying Unturned is “dead”, or a “trap”, or that it has “degenerated” into rp or whatever, all representing things one could make a case for, but what our content creators end up with is not a real analytic video where both sides of an argument are taken, where they try to come to the root of the problem or try to find some actual sensible resolution for all the people who don’t understand why exactly the game doesn’t appeal to them anymore or “what went wrong”.

Because we do need that right now in the game’s life, and every time someone attempts it, it turns any crumble of what I would consider to be a redeemable true feeling into a dishonest piece of garbage. It fuels ignorance ultimately.

3.0 also isn’t optimized the best though

you could say that again

I myself didn’t say that yarr is an employee “Sir Sniper” did. However I couldn’t find anything to disprove that. besides that I agree with you I said a lot of things people have already said but this is my last Unturned video (for a while) and I wanted the video to be memorable.

I myself didn’t say that yarr is an employee “Sir Sniper” did.

Alright then, my bad

this is my last Unturned video (for a while) and I wanted the video to be memorable.

I can believe that you wanted this to be something bigger, and maybe to some it will. Good luck on whatever you do next

Is it just me or are a lot of Unturned veterans quitting en mass right now?

Anyways, while it is true that many of the points that have been made in zman’s videos are the same as other people have put forward, I can see why someone would want to make that even more clear than it already is.

comments saying Unturned is “dead”, or a “trap”, or that it has “degenerated” into rp or whatever, all representing things one could make a case for, but what our content creators end up with is not a real analytic video where both sides of an argument are taken, where they try to come to the root of the problem or try to find some actual sensible resolution for all the people who don’t understand why exactly the game doesn’t appeal to them anymore or “what went wrong”

I can see a point being made here for veterans who, of course, have a lot of hours on the game, not having any more fun with the game. But I think we’re missing out on a few rather crucial details. When veteran players complain about the game not being fun and stale anymore, they often forget to mention why. So, imo, what they should say is something along the lines of: “Due to its many technical, coding, community & gameplay problems, Unturned is currently in a state of…”

Especially when it comes to servers, people usually don’t go into great detail, which I myself as a former server owner found difficult to do in my own forum thread that I’ve made a couple of days ago, titled “Unturned - My opinions and things I’ve realized after 4500 hours of Playtime. (this is a rant, kind of)” if you wanna read more about it. Though, it seems useless at this point trying to spark conversations about this topic, since all the answers and questions people put forward are the same.

Stopped watching when the dude said that nelson should make his own AC for a minute, just sat there in awe.
It’s not that easy, plus the dude more or less regularly broke 3.X. I really would not want him to break software that runs in kernel mode on my device, plus that would take even more time away from II.

Yes, 3.X is in a sorry state.
Yarrr did the correct thing. If people cannot be bothered to read the bot message I doubt they would read it if you type it out. And yes BE can and does fork files from your PC. Yarrr literally cannot divulge as to what BE detected because BE themselves don’t share that information. His reasoning for “just look at his account bro” is beyond flawed. People going “why am I ban” is the reason we have that embed in the first place, plus it keeps us sane by not having to engage with 90% of the folks that ask that question. You know, the type that will spam and demand to be unbanned.

BE in it’s current implementation is whack, yes. EAC or basically anything would be better at this point.

TL;DR: As much as I agree with some of the points he makes some other ones are bewildering stupid. Solid critique when it works, sadly at times it just does not.

Others have made a lot of great points here. Adding on that:

I think it was commendable of Yarrrr to personalize a reply, even if simply linking to the BattlEye support page is ultimately where they should go.

Just to put things through that within 2 hours since the release of that video I did have a civilized chat with the uploader and it was apparent that the whole section about me was simply a misinterpretation when I provided ban information with the user who I talked to regarding game bans.

As for evidence of me being under paid employment of SDG, my rank itself is the sole proof that I am not what the video describes me. I have the Leader/Community Staff/Officer rank in SDG/Discord/Steam, which is the highest non-dev rank. Otherwise you would see me with SDG Employee/SDG/Developer rank in the same places. Alternatively Nelson/Molton could’ve been contacted regarding my position.

I don’t really have a say for the rest of the video as, like what most people say, it’s pretty much like any rant that people have heard of hundreds of times.

To clarify some things about the discord
The Ban Appeals message is sent directly to users upon joining and by a moderator or supporter if they have questions about a ban. I understand not everyone will read this, but most of us don’t want to explain the exact same multiple times daily, which is why we have this system. 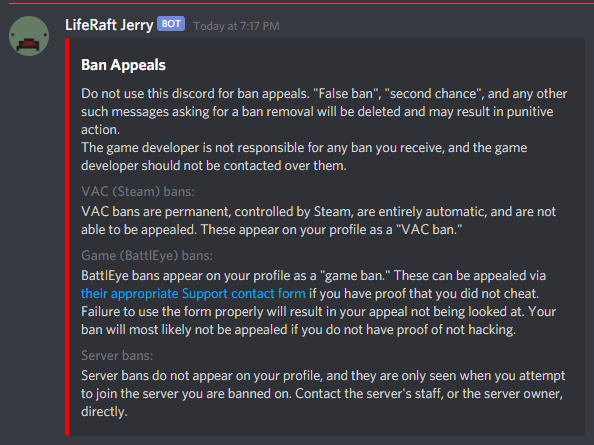 I can’t find anything mentioning that Sir Sniper was muted (the image shows the command to send people the game ban information message shown above) and they have no mention in the moderation log. I can understand some confusion regarding the command because of its wording.

To end this, if anyone has any suggestions for how we could better inform users of how to appeal their bans in the future please let me or another Discord staff member know.

Argueing about how bad BattlEye is is pointless. There will always be a way to get something undetected or bypass it.
Aggressive anti-cheats can catch a lot of cheaters but it may think someone is cheating who actually isn’t. It catches more cheaters but might false ban people as well so this shows it knows what might be a cheat.

This was made by vanilla gang