The smell of roasted steak fills your nose

Cooking is already boring enough. Well I can’t really say that since cooking hasn’t been implemented for our glorious sequel, yet. So let’s prepare a tasty discussion on how we can make cooking more interesting for the time being. 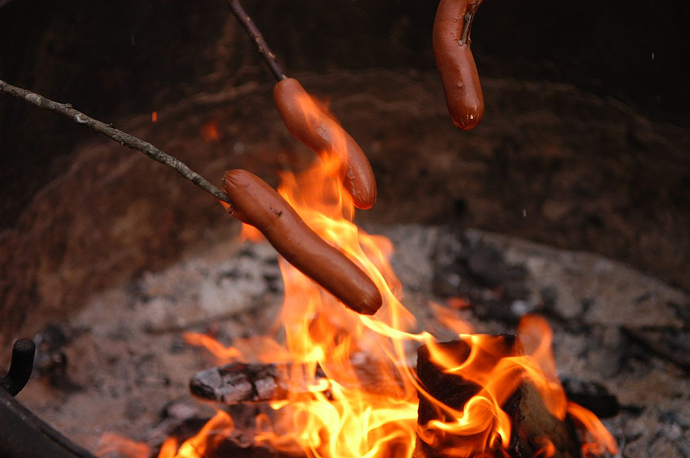 Get creative with what you make, and don’t forget to feed your friends and poison your enemies!

Can’t argue with that.

wait for our ingredients to cook

The time needed to cook something will depend on “what” we’re cooking and the “yield” of it.

Is there a determined cap for the amount of time it could take? I don’t want to wait 4 hours to bake a virtual pizza just to get killed because somebody threw a red hot can of beans at me.

Any appliances that are suited towards cooking will reduce time and/or allow you to cook multiple items at once.

I like this mainly because it’s realistic, but not realistic to the point where it makes everything stupid. Also, it makes more sense, unlike in U3 where you can bake a pizza using only a campfire.

The yield of an item defines its size and how much space is taken in cooking appliances.

Minecraft furnace but with multiple slots for food? Also, you should probably be able to split food into different portions (e.g. half a steak) in the case of full “storage”.

This could be a bit too advanced from the gameplay of Unturned by itself, but this as a mod would be a neat feature to have.

The concept of making food take time is a good one, and poisoning? Ingenious. I’d literally carry a really good food around constantly (let’s just say cake) and poison it so that if I got killed, my cake would get a spite kill. A dedicated server message would make the revenge even sweeter.

Also, you should probably be able to split food into different portions (e.g. half a steak) in the case of full “storage

In the case of full storage, you should prioritize what to cook before you cook another item. Cutting items into a smaller portion then cooking would defeat that purpose. Perhaps upon fully cooking large items, such as the steak, it would provide two half-portions, where each portion gives half value of what a full portion of steak would give you.

Perhaps upon fully cooking large items, such as the steak, it would provide two half-portions

I was thinking more like the turkey in U3 where you can split it into portions after cooking it.
Also placeable food maybe?

Poisoning food might get a little crazy but would lead to some cool “trap” ideas, I like it. Seasoning food is something I really want to see. Maybe a oleander seasoned steak would boost stamina endurance for 20 mins or burning Nettle tea could fix your radiation like cough syrup and purification pills. No those aren’t realistic but they are cool game mechanics, that put utility behind common herbs found in the woods. Sure anyone can cook a steak, but knowledge of the forest and the herbs that live in them should reward the player.

Would be cool as well if seasoned foods added to the food meter or calorie points. Instead of steak just being 55 food it will give you 65 (Idk how U2 will handle food just an example). Would be cool to see things like soups and meals providing more food for your meter than raw ingredients. You could eat a potato, meat, and carrots but to add them in a stew or cook them in a bowl, that should reward more food. Giving a reason to have a pot or cook stove.

Like how berries work in 3.0. I know russet and amber hurt your radiation, so I never touch them. I know (raw) teal yields more water than food. Which is the best food in 3.0’s food mechanic system. We all know when your food is at 100 you gain no more water from lettuce and tomatoes. So keeping your food and water equal is the best option. Lettuce’s food meter when eaten will eventually over run your water and you will gain no more water. Instead of wasting a water bottle or keeping extra water supplies on me I just carry teal berries. My water jumps up in front of my food and never makes me think of balancing them out. I know Mauve will heal your radiation and Vermillion will heal my health. I use these to my advantage while running through the woods in 3.0.

Would love to see herbs have a cooking affect on food like berries in U2. And the return of berries, please.

This could be a bit too advanced from the gameplay of Unturned by itself,

This is always something that worries me about the idea U2 and how “advanced” it could be. Yes this is an advanced feature to request…for a 3.0 update. But this is U2, a completely different game. I mean I can’t speak for Nelson but this is not a 2.0 to 3.0 shift. That’s one of the reasons he wants make it it’s own title, a separate game in your steam store.

I don’t like this common idea in the community that U2 needs to be held back because Unturned has some level of complexity it needs to kneel down to. I mean applying common sense is implied with that statement. Making complex frustrating mechanics is different from a game having rewarding in-depth systems. Everyone should be able to roast a steak over a fire and get a reasonable amount of food in there meter. But a player that finds rosemary to add to the steak should be able to add to there streak as an added bonus. Its as simple as 3.0’s cheese sandwich and venison cheese sandwich, you add one more ingredient.

And I don’t mean to say I expect U2 to have skill trees with thousands of options or a map 15x the size of Russia cause those are unrealistic expectations. We need to understand that Nelson is one man working on an entire game, but we shouldn’t under estimate his abilities or the games potential. I mean already look at the small details on the car in the closed beta. Windows that roll down, the engine sounds suppressed when the windows are up, smoke on the tires, animation for getting in and out of the car, hazard lights, and blinkers. Those are all tiny things that just make cars seem more in depth. Not necessary at all but cool.

I mean Nelson has a vision for a game I really believe could be the next big survival title. Things like changing seasons, spoiling food, bandit AI, melee system, excursion, advanced zombie AI, and more advanced electrical systems are advanced and are meant to make a more in depth survival experience. These are all things I can think of that I believe remedy failings in other survival games. This game will breath fresh air into a genre that hasn’t really evolved since it started. I don’t want U2 to be held down to Unturned 3.0’s standards because of some idea the player base won’t like it cause its to advanced.

So no adding some rosemary to a steak is not to advanced.

I also didn’t type all this out because of Aden’s singular comment, but because of all the ones I have seen before it. What do I know I just like to play Unturned and am really excited for U2 like the rest of us, but I hate to see good potential content be discarded by people claiming it is to advanced as they are comparing it to 3.0 simplistic run and gun style. Like players won’t be able to navigate the game and comprehend it or Nelson can’t make it.