Some random stuff that can be intresting and add variety to the game.

I know that are not typical turbines with rotating wings but one of AWES (Airbone Wind Energy System) this one ofcourse is just some plane flying around his own axis.

The maintenance of turbines its just reparing the wings or generator, gears etc.
Well there is one of those seasons that makes your bones frezzeing.
Yup i meant winter,nothing special right?
Wrong in those days you need keep eye on those beloved turbines because they maybe have icy wings syndrome (haha joke).
So… what can you do to get that frustrating ice from these wings?
You can do it in hard way or easy way, the is easy install inside wings system of heating (keep in mind that will cost energy from turbine that produced it plus some compoments that needed to installation of it.While hard way you need to get high (idk very long ladder or crane also depends how tall construction is) also icepick or something else will be neccesary oh don’t forget about how time consuming is it.

Radio in car just finding frequency of brodcasted music or conservations.
Computers a devices taht are use in form education,comunication and entertaiment(maybe nelson will make minigames or sort of disks that contain some recordings,informations games etc.
Radio towers help increase signal.
Servers are just fridges that contain informations or hold multiplayer server for minigames.
Internet its a better solution to contact with others with devices without use LAN cable.
Radio (not attached to car) it can do what car radio does.

Upgrading radios will make them better in terms of stronger signal and maybe hotkey for your favorite stations.
In case of computers faster operation of it and can hold more advance minigames without burning it self(its gonna be of base that some game it just 8-bit platformer to top tier 3d shooter or other genre of games)

Card board games,Card games.
Simple at its sounds just some form of entertainment or like as you want resolving troubles and trades
technique and even relax with the bois.

Strange guns concepts.
For examble a revoler that its belt feeded and shots normaly it can be some thing that was maded or you can make by your self just less efficient and durable.
Here is what i found: 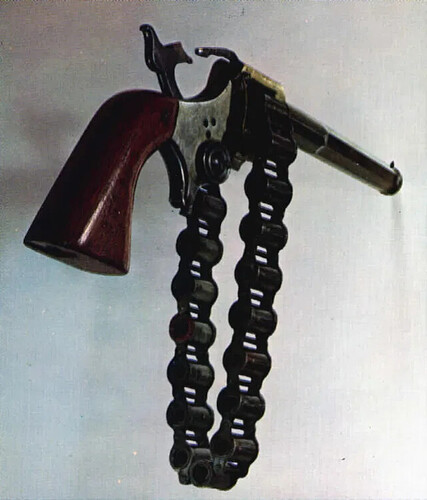 Maybe the video games on the PC could be an Easter egg or a hard-to-get item. Such as Minecraft and their music-discs. Maybe a boss or mega zombie could drop one rarely. As for the other ideas I think there cool, It would be interesting to see turbines powering things.

Well making games on pc rare item its intresting take on that.
Maybe just doesn’t drop when mage get killed i think its kinda weird why he may have that item to drop?
Anyways its good to think where and how the should be rare.

And nelson plans to add diffrent source of energy like turbins i just think that maybe more variety of them.
I think also they need maintenance to still working properly as should be.