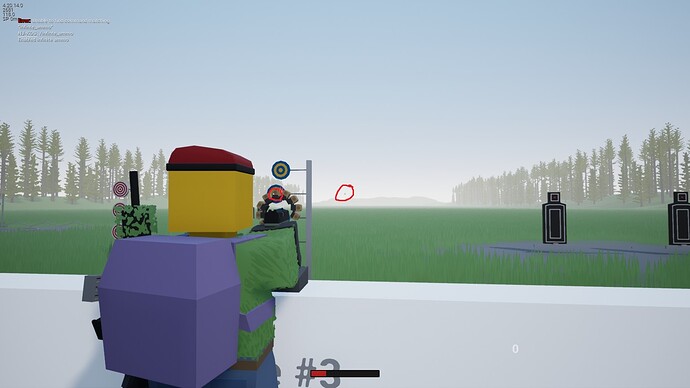 20210302101005_11536×864 135 KB
I know that tiny cross its showing where you hit but if you shoot in like that possition it’s counts both hitmakers.
Someone may think “oh thats good” also think about situatio a two zombies/enemies stand in centrailny in spot where you could easly shot them both because two hitmakers its like posessing gun with bullets that split in half and go to both of them.
Thanks for reading.
1 Like
MoltonMontro March 3, 2021, 5:40am #2

It’s not shooting at both locations – your aim is being blocked, and it’s showing you where your shot will actually end up. I cannot recreate the issue you’re describing.

Was it shooting in both locations for you?

Well not exactly shoot in both way with one shot but if you shot where it’s hitmaker in shape of cross will take one bullet same for the normal hitmaker in front of you.
It’s working in some form of turn first will hm with cross will hit (that depends of your location of hitmakers)
and in front of you hm also will hit.
I should describe it more clearly it just oe bullet spen on that target and next on other without aimming at others target. 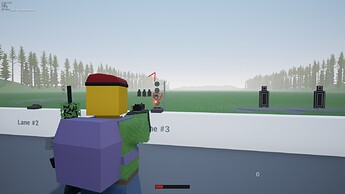 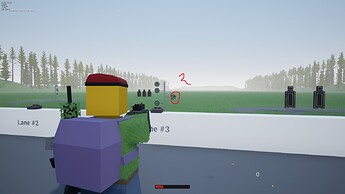 also i do it without moving on the next target.

You don’t have to move because your shot is no longer obstructed by the object in the first image.

Well you doesn’t see the that little hitmaker that one on left side?
Even if mine hitmaker that middle of mine screen aren’t obstructed by object/entity that left on mine side will maybe blocked by something and i can shoot and counts it as a hit.
Don’t trust me try on shooting area in that exaclty this possition to allow you do that.

Also i think that one left side hitmaker its only intended for melee weapons when your axe lands on someting.

I think u are just not getting it correctly. Try postinga video so we can see that split bullet trick.

That sick split bullet trick ain’t really spliting its just two hitmakers that works but only one should i think also how you can record it by steam?

alright, im gonna do exactly what u are doing on the game.

Ok for a moment I thought it was true, but it was not.
I already confirmed that you just misunderstood what is going on. You said that when shooting, even without moving you can hit both targets. Which is true, but you can’t hit them at the same time.
When aiming in third person at a target that is to the left, you will get an x on the target. That means it is close enough to obstruct your bullet and make it fall there. If you shoot, the hit on the target with the X will count. And it will proceed to change sides to the right after taking the shot.
Then without moving, the target is now in the same position as your sight. And if you shoot again, it will switch back to the left and the same thing. HOWEVER, if you mean that the HITMARKER appears on the crosshairs instead of on the X, it is because it simply has not been programmed a hitmarker mode where you hit, but the HITMARKER appears on your crosshairs when you hit something. 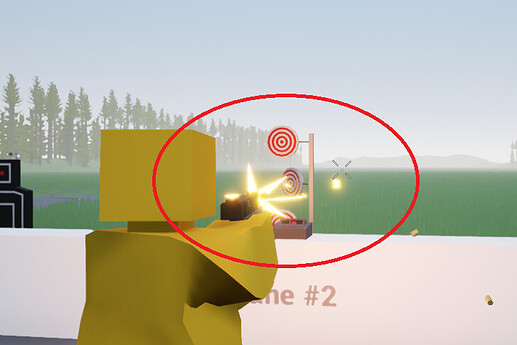 So no, there is no double hitmarker or anything like that. Because if you stick to a wall and shoot, the bullet will fall on the x but there will be no trace of another bullet elsewhere.
Myth busted uwu

In some post i said it’s not excatly shooting both targets with one bullet when i had confrentention with MoltonMontro and about hiting both targets as a said in special position that allows you to hit another target without moving your camera and middle crosshair on them instead that X crosshair also yeah about it will proceed to change sides because game doesn’t know which hitmaker should count as a hit.
Well yes there none double hitmaker (i just misunderstund with crosshair).