Today I’m starting the development of my Twitch-chat PvP game.

It will allow two of my viewers to queue in by using chat commands and after their opponent is found they will be able to choose 5 attack moves and 5 defense moves. Attack and defense moves can be either fast, strong or precise. If your opponent fails to defend he will lose health based on the strength of each attack. Whoever has the most health after 5 turns have passed - wins!

The whole development process will be streamed from the very beginning to the end (or at least I hope it will!) so feel free to join me and hang out while I work on it!

It started a little bit slow, I’d even say it started terrible, but it’s the first time I am using a drawing tablet and it turns out it’s not as easy to draw with it as I thought.

After initial struggles in form of me not drawing as good as I expected and using a software that I downloaded few minutes before the stream and actually never used I managed to make some art that I am happy with!

I decided to make all the art using the tablet, no matter of what it is - characters, UI or whatever, I wanted it to look a bit like the old flash games that I used to play when I was younger. You can take a look at it below - I’ll probably be improving as I go and these can only get better I believe 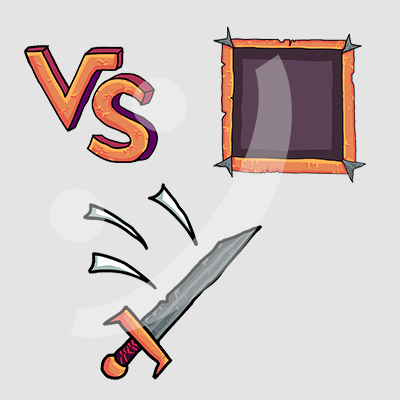 The real question is, what will the :Kappa: chat command do?

I haven’t been around a lot lately but that doesn’t mean I’ve been lallygagging!
There’s been a significant progress in development of this little game and right now the only things that are missing is Twitch-Unity integration and some more character variants.
Sorry for not streaming, I’ve been really busy for the past few days

Here’s a little video of what I’ve got - player moves are randomly generated for video purposes, and the result is being skipped to speed up testing.