Hi there. I’ve been playing Unturned for about 2-3 years now, and just recently the server list interface was changed, and that’s it. That’s the only interface change I’ve seen.

Personally, I think that Unturned could use some touch-ups on the interface. Obviously this is an opinion, but here’s some of my reasons:

So, here’s some of my ideas:

Here’s a layout drawing with a few of the ideas from above:

https://imgur.com/a/lDPqQ5R (Blue background so you can see the black)

The navigation bar could also go above the news feed, giving the news box a lot more room.

Bug - Also, scrolling with a mouse in the news box doesn’t work. You have to click and drag manually. I’m not sure if this is for everyone or just a Mac problem.

Right now, chat is really spaced out and some RGB colors make it extremely hard to read while looking at certain materials in the game. A whole “chat box” would fix this - put a background behind the whole thing, and it would probably be a lot easier to read and see.

Here’s a pretty bad drawing I made describing this idea: 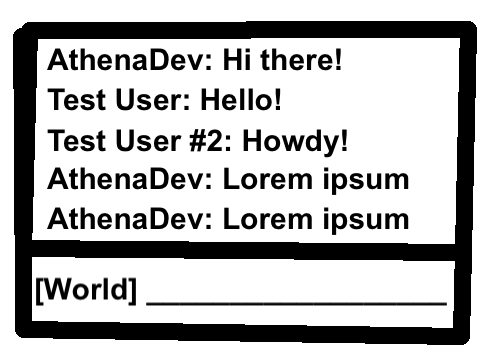 https://imgur.com/a/NKlfn2t (New forum users can only put 1 image in a post, apparently)

Gaps - this is a design preference, but there are just a lot of gaps everywhere. You can see it between [World] and the text box in the image above, and it could be improved.

I don’t know whether or not this has been suggested before or if Nelson has time to prioritize this, but hopefully it brings some ideas to mind. Thanks!

I’m honestly fine with the UI. It’s been there for forever, and does its job.

Worth mentioning that Unturned II will likely have a completely overhauled UI, it already does in the aspects we’ve seen in demos.

Great point – I was actually meaning to mention that. If we’re getting a completely new UI in Unturned II, I can totally understand that it wouldn’t even be worth it to make a new one now.

Yes, it does do it’s job, and it does it well, but I think it definitely could be improved if we wanted a better experience.