In the last couple of days iv’e been remaking and improving the UII style police car i made some time ago,also made some variations:
This is the base car model the Ford Crown Victoria 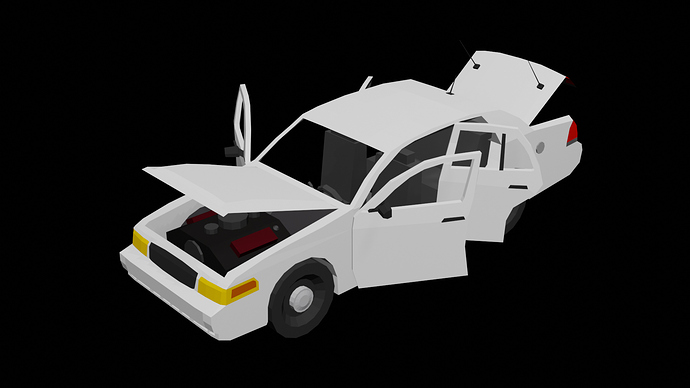 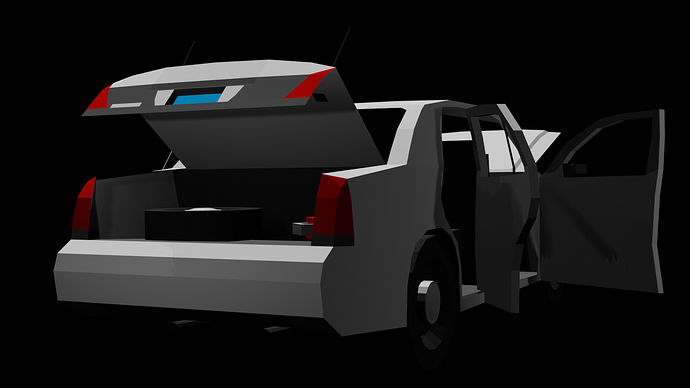 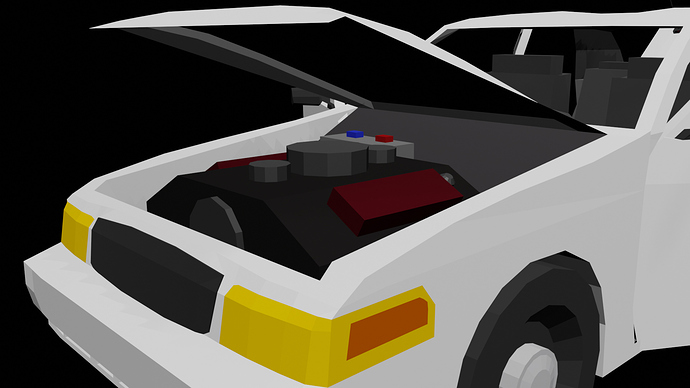 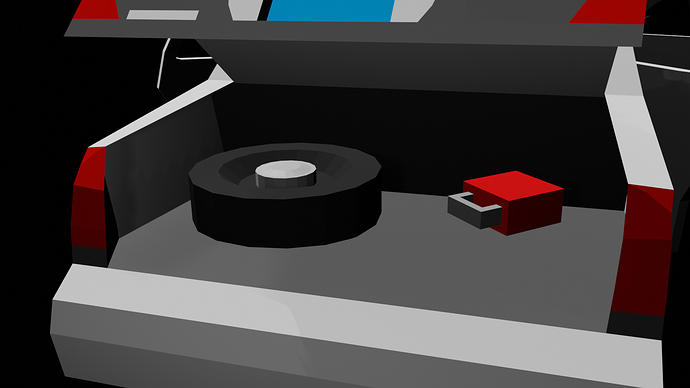 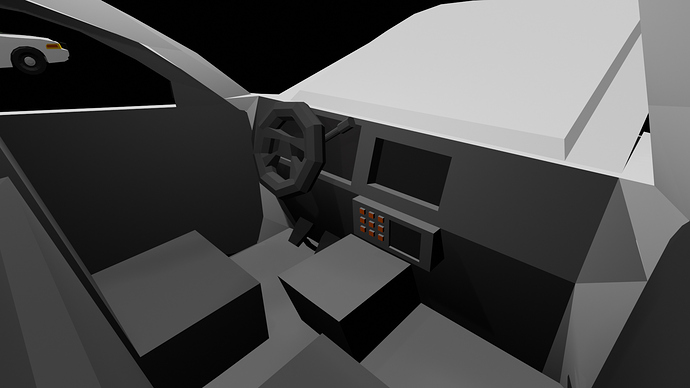 CVPII1920×1080 193 KB
There’s still some work to do for the interior and improvements
With that out of the way lets start with the law enforcement variants
The detective variant,not much different form the stock other than the push bumper and the 2 spotlights. 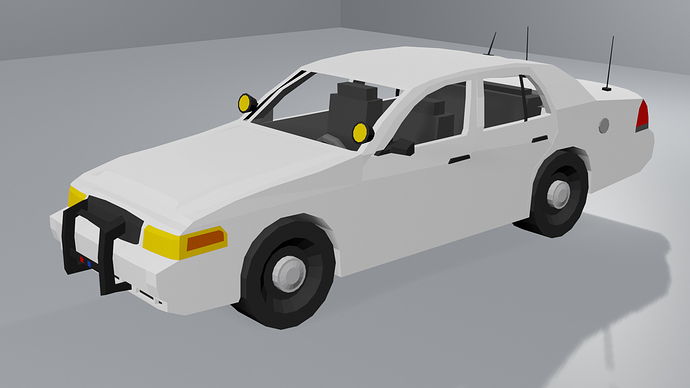 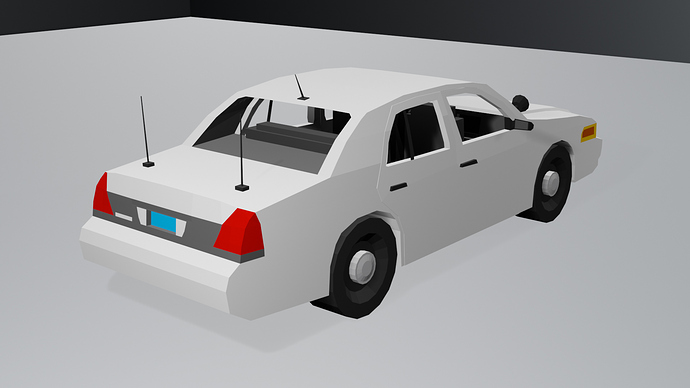 Detective21920×1080 187 KB
The police variant,simple paint job,police text on the sides and a siren done in the UII style. 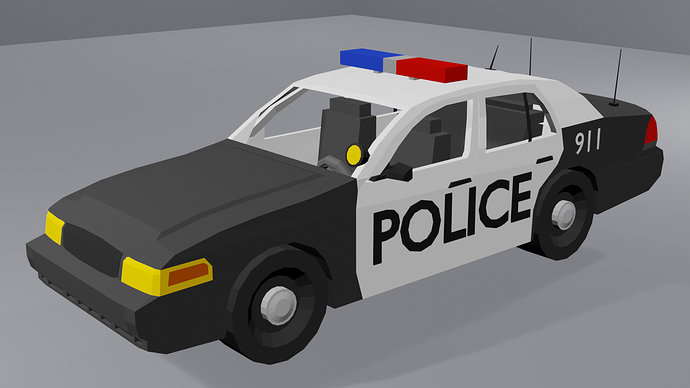 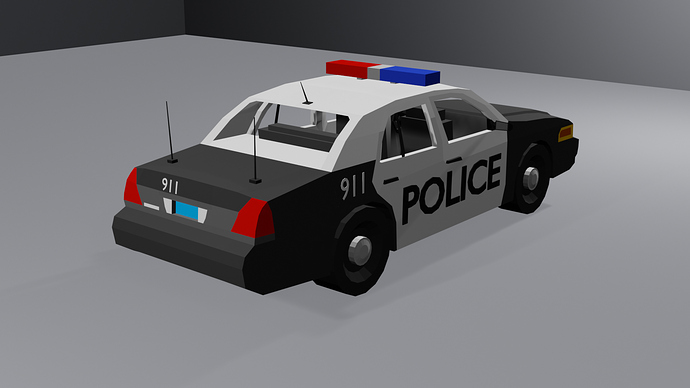 Police21920×1080 191 KB
The sheriff variant,same as the police on apart from the siren and markings and the color. 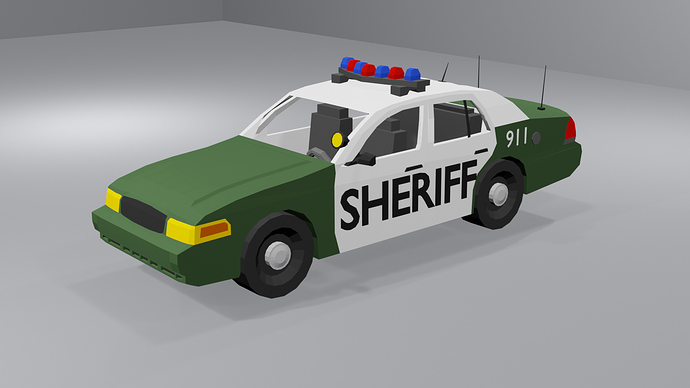 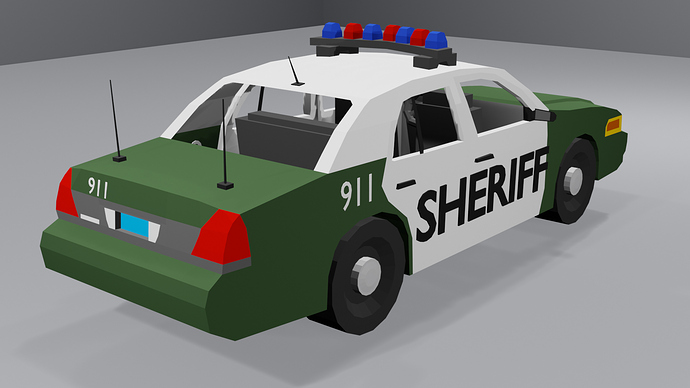 Sheriff21920×1080 233 KB
And the last but no least
The state trooper variant,same as 2 variants above except for the color,marking,siren and the push bumper. 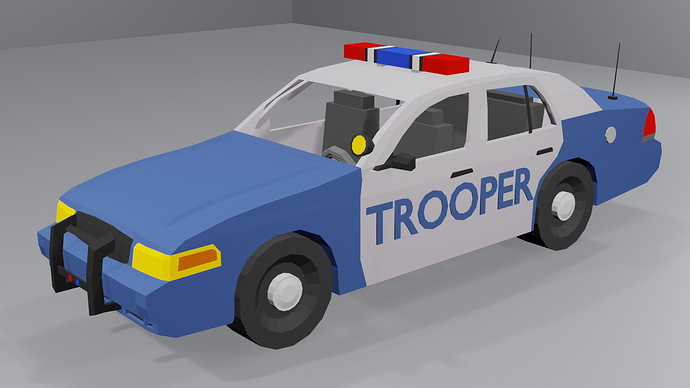 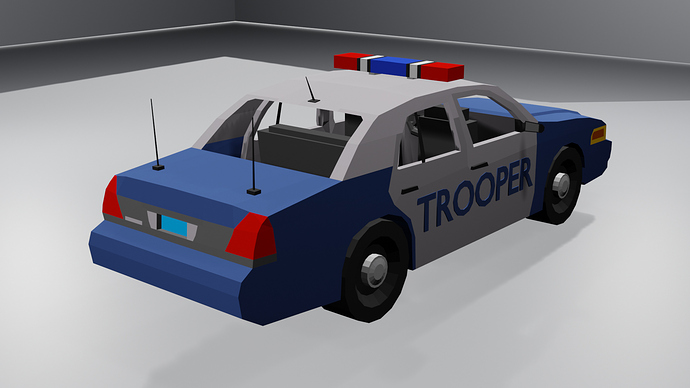 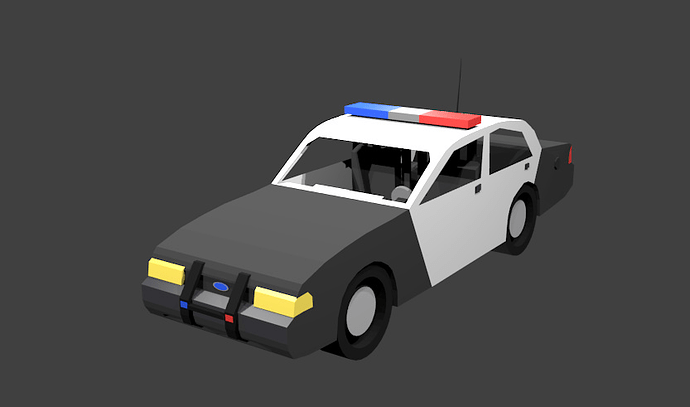 image833×492 79.9 KB
At the end a small showcase of all the variants besides the detective one 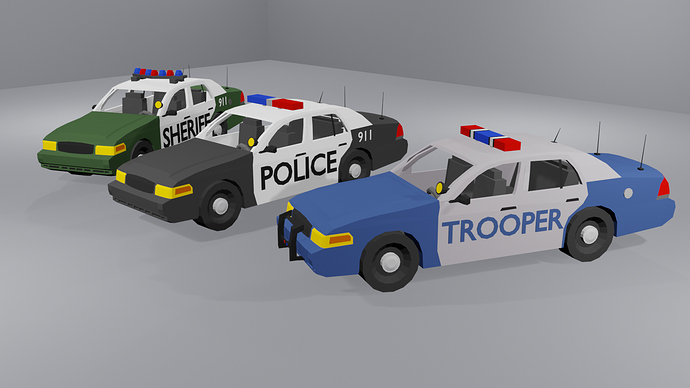 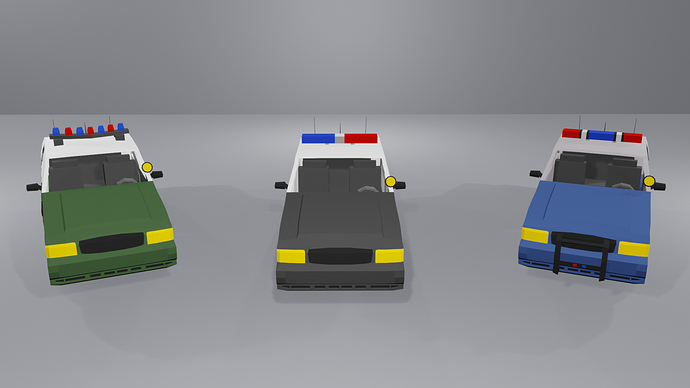 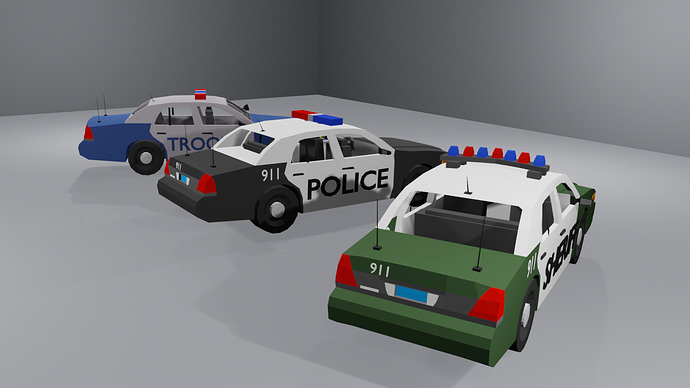 A few things could definitely be improved still but its good so far. Maybe work on improving the lights and put up something to separate the backseat from the front.

Any tips and ideas of improving the lights?

It seems like they have way too much yellow for the spotlight and the headlights. Maybe try making the detail on them at the same level as the Hatchback also. With the lightbars I’d pick one style to go for all the cars. The cars just appear to have less detail than the Hatchback does.

Oh the colors are place holders really,the lightbars are different on purpose,im assuming you are talking about the police and state trooper ones since are less detailed,maybe improving them and adding more details would give them a nicer look?

The less detailed was referring mainly to the headlights.

Regarding the color i managed to reduce the yellow,just on one car at the moment 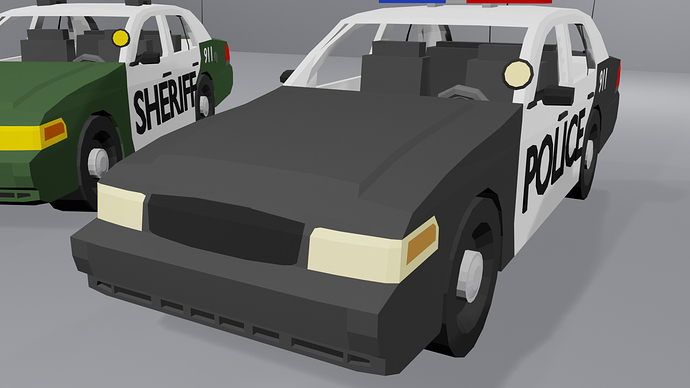 Huge improvement from the first police car! Real nice stuff whit the openable doors and such, everything is better shaped. But theres always room for improvements of course.

(These are all “my” suggestions)

-the wheels looks a little odd (I think atleast)
-use smooth shading on certain round parts, especially the tires.
-the door seems to bulge out minimaly, I’d suggest either have it totaly level with the rest of the side or have it stick out more because it’s too subtle. (aka bulge it out clearly or don’t bulge at all)
-the interior still needs a little work as you said yourself
-The walls are thin at some places (Ik how hard it is to thicken evenly)
-I think the entire vehicle should be a tiny bit wider

tip for the interior, the car in the demo has beveled edges on the seats which I think you could try aswell. And I think I see some small topoligy issues here and there…

Your new model is an improvement in every way compared to your old police car. This is just feedback, keep it up! 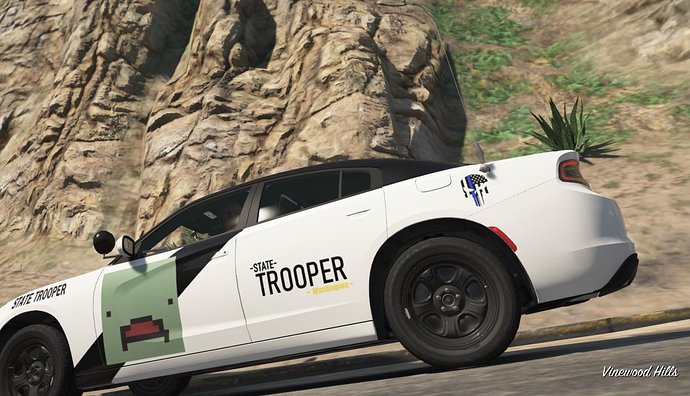 Imagine if the stuff you put in the trunk would be visible to other people. That’d be pretty cool

Not a police vehicle but i tried a muscle car: 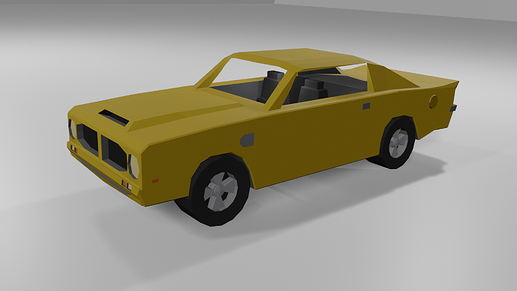 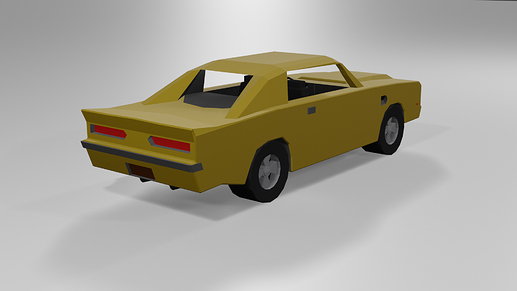 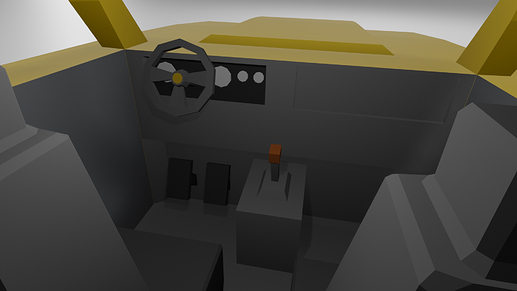 @Dozy “lit af” you have made huge improvments

That’s a pretty sweet muscle car, Dozzy. Did you base it off of any specific model?

I imagine myself taking this car and driving around between cities, it’s a shame that it drinks a lot of fuel

+1, I like how it fits in with II’s aesthetic as well.