I’ve recently reinstalled my Unturned and Verify Integrity of Game Files and yet, I’m stuck with this problem. For the first time, I’ve taught that it’s something got to do with my modifications for Unturned so I’ve uninstalled all of them and uninstalled my Unturned and reinstalled it back. I encounter this problem only for Unturned and this is my first time I’m encountering it. Either I get an entire Black screen or an entire White screen. Further continuing, if I leave it like that I can hear the intro song of the menu meaning that I’m already loaded into the menu but still it’s covered with full white or black screen. I’ve been searching for a solution for 2 days and none on the internet seem to be working. I can give you a brief of my specs. If you need more I can send a dxdiag.txt file over here (if really required)

It would be better if someone could reply to ASAP as it would help me save much more of my time rather than going all around the internet and searching for a solution which really works for me.

A screenshot would be appreciated, especially if there’s a message pop-up, as just typing things out is not always useful.

Also, a fuller list of computer specs would be nice, such as including RAM. 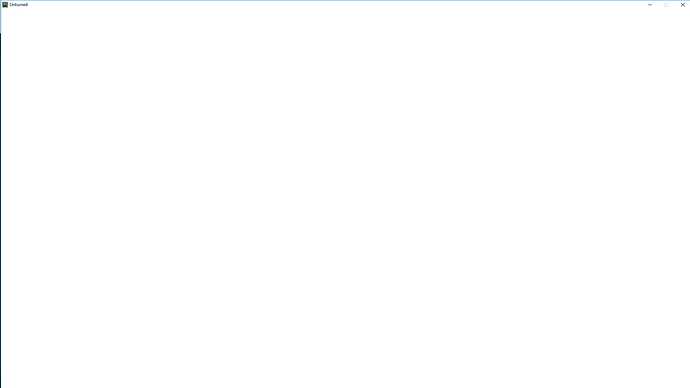 Untitled1920×1080 9.48 KB
It either becomes entirely white or entirely black. If I wait for a while without touching anything I will load up to the menu and how can I say that? that’s because I can hear the intro song which is normally played once your loaded to the menu. Again I can’t click anything nor see anything at the menu as it is fills my Unturned screen entirely with white/black screen. [Edited] This is not in full-screen if I was in full-screen I would have not got any of these information and I would have been puzzled, as soon as I enter to Unturned I press Alt+Tab to minimize the resolution in order to see whether it works or loads my game half way through. [Edited] Here is a list of my (ENTIRE) System Specs. It’s posted in this pastebin website please don’t be afraid whether it’s a malicious website. It’s long and informative. https://pastebin.com/8AqyAkhc
Aj_Gaming July 9, 2018, 4:13pm #4

what about a pic of the error log? you can find it int he game files…

Nope, there are no error logs. I suppose that if my game crashes then we would get an error log but in this case it keeps sitting at black/white screen. I leave it for 5-10mins still stuck even when waiting for 1 hour I found no improvements what so ever. So I decided just to exit the game and search for some help.

I have no idea then

there is no error log because the game didn’t crash, it is still running but the only thing he can see is a white screen. This sometimes happens when I try to play tf2 or overwatch. Der, Maybe try to remove some games you don’t play anymore…

It happened to me a long time ago, when my friend also was playing unturned. I don’t really know the reason. When he stops, i could’ve played without any problem.

Any clues on what did you do after you got your Unturned back to playing?

It was probably fixed after an update or after resetting my computer.

Well my last hope is to uninstall the entire Microsoft Visual C++ Runtime Libraries and install them back again would take a long time tho. Got to get back to square one till then. Keep posting if you viewers have any fixes to it.

Nope no luck, I’ve uninstalled and reinstalled them back from fresh and yet this problem continues. Would be extremely helpful if someone could help me out of this. I’ve been playing Unturned for like 2-3 years and It sucks when I get stuck like this at Unturned.

How long has this been happening?

Who sang: “If you’re thinking of being my brother It don’t matter if you’re Black or White” totally didn’t play this game.

@KingFrog It has been happening since day before yesterday. I believe is it because of the Windows 10 1803 Update? (April 2018 Update) because one of my software called as paint.net crashed and i fixed it by a forum discussing about how to get over with it. It looks like they are blaming the Windows 10 for the .NET Framework or even also C++?

What version of Visual Studio do you have?

@MoltonMontro Visual Studio? I don’t know about it and I don’t even have it I think so. I only have Visual C++ 2005 Redistributable till 2017 edition. I have both the x86 and the x64 due to the fact that my Windows is a 64-bit (x86) Version. So I got to download them. If the Visual Studio is important please send me a link ASAP.

I don’t understand how it is possible to be simultaneously 64-bit and 32-bit. It should be one or the other, as it can’t be both.

@MoltonMontro https://knowledge.autodesk.com/search-result/caas/sfdcarticles/sfdcarticles/How-to-remove-and-reinstall-Microsoft-Visual-C-Runtime-Libraries.html Scroll down to the end of the page and check at the subtopic [Notes:] Check out this website, you normally require x86 and x64 in order for 64-bit machines to run properly. Not yet sure? Search it around the net, in fact, my PC came along with x86 & x64 Visual C++ Versions. BTW I downloaded the Visual Studio 2017 Edition, I hope so it fixes it otherwise I’m washing my hands off because it’s going too long and I guess none may be able to fix it until SDG Nelson releases Unturned 4.x in near future till then fingers crossed after I install all the packages for Visual Studio 2017.