Honestly, I feel like MREs should be changed. This is similar to the MREs in Unturned 4 topic from 2 years ago. But still, I’d like to elaborate since I’m actually eating from an MRE right now. It cost $10 from a Military Surplus store. 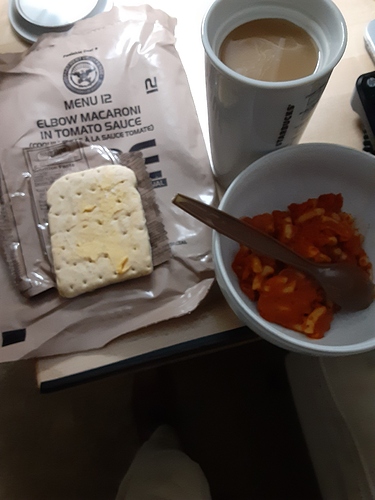 In this case I got wheat snack bread, some elbow macaroni, mango peach applesauce (which I left out because I don’t like apple sauce), some instant coffee, and a pair of sour skittles. With Unturned II MREs, it should be various types of food that you can get at random. Any food in the game from common to legendary food. Whether it be canned food, a piece of meat, etc. With some extra pieces of food like bread, beans, or some other foodstuff with a candy bar and some water or something like that. Maybe add a packet of instant coffee to change a water bottle into bottled coffee. That would honestly be cool.

I mean, why not do what zomboid does and have it like a medpack, with very few slots that can spawn with set loadouts that resemble different types of mres?

Perhaps in Unturned 2 we should be able to open them and use it part by part and we neednt eat the whole thing at once.

It shouldn’t be completely random stuff, there should be several different “sets” of food you can find in MREs, it should be the same for medical kits too I think.

I had an MRE once, it had quite sloppy food, fruit jelly type stuff, instant sweet drink to mix with water, and some very dense biscuits

I’d expect MREs to have these qualities:

@stuttgart_flugart That’s my point. Random sets of food, not random things. Also, funny enough my MRE came with a little food heater and some matches.

I think it could come as a pack, then when it’s in your inventory you right-click it and the bag disappears and all the food comes into your inventory.

In my opinion, MRE should each have a tag with a predefined meal inside (and perhaps a different texture each to differentiate them). Some should also be sufficient to stay fed for a whole day or more (like 24h MRE just like the french army RCIR) while some other should just be enough for a single meal.
I could find some idea for meals inside MRE there, and i took the french RCIR as an example, it could also include meals that you would need to cook before (those could need a bit of time to cook) 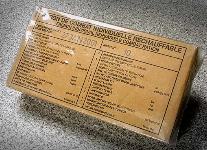 I am a big fan of calories as I think that could really allow for cooking to be viable and decent part of content in U2. Seeing different foods having higher calorie count making high end foods more viable than in 3.0, as well veering away from the 100% food bar we could store more calories and last longer.

Although I am not a big fan of vitamins and nutrients as that seems too much. I don’t want to be vitamin or nutrient deficient on top of having to worry about over hunger levels. I am not very knowledgeable about SCUM but I do know it has a quite depth nutrition system. From the videos I watched it seemed just eating cooked meats and playing the game your levels stayed pretty well satisfied. Which makes me wonder why add a complex nutrient system rather than a simple calorie intake system.

At the end of the day a steak is a steak. In a survival situation I would eat moose steak for 30 days straight, and be fine. I am not a fan of food becoming less valued if you eat too much of it.

But I think MRE’s would be cool in a pack system, where you open it and it has a full meal that is calorie rich and keeps your characters food levels high for some time.

What i would like would be the ability to turn on an Optional food difficulty where you have to take care of what you eat, nutriments, calories and etc to stay healthy but it’s most likely something that would come with, say, a workshop mod…
But i agree to your idea, we should be able to have a easy method that remove all non-hunger food related stuff.

Honestly, it makes sense for MREs to be one of the prime foods in Unturned II.
You just find a package of various food items that are all shelf-stable for years.
If food degradation is going to be a thing in Unturned II, you can expect canned foods and MREs to be especially sought after, but rarer, because of how great they are for storage.
Right now, MREs are not precisely MREs, they’re just glorified candy bars that feed you 75%, if i recall correctly.
I’m sure that foods are going to be reworked, just like ammo was.

But i agree to your idea, we should be able to have a easy method that remove all non-hunger food related stuff.

I am not sure what you mean here? Do you mean servers should have the ability to remove things like nutrients and just worry about your food bar. I was just talking about the base game. I didn’t really suggest that but I guess for community servers it couldn’t hurt. I am most interested in playing official servers, and really only played vanilla on 3.0. I am not a big fan of altered servers as I like the base game challenge, compared to other survivals 3.0 may not be as rigorous in survival as some games. But I like the durability on food, bullet drop, bleeding, and varying zombie types. Removing those elements like on easy servers take a lot away from the game to me.

The reason I say that is because in U2 I hope to see 1 difficulty on official servers. With one universal playlist besides maybe maps. Community servers IMO can do what ever they want. I wouldn’t want to see varying official survival servers with some that have bleeding, some that don’t or some with difficult nutrition systems and some without.

If we reworked MRE to be inconvenient food item storage thing i’d probably starve before i could get the contents of the MRE into my damn inventory, not to mention the ludicrous amount of slots the contents of the MRE would take up. The amount of items that’d have to be added to the game would be ludicrous as well, considering that there are 24 different menues in the us alone. If we’re going to rework MRE’s to be more realistic we may aswell require a can opener and a spoon just so than you could eat canned beans. Personally I’m fine with shoving an entire 1200 calorie meal down my throat In under 5 seconds without even unpackaging it. Keep in mind we’re talking about a game with a rainbow hatchback and explosive bubble gum, not to mention the countless references in some of the item descriptions. Realism is not and should not be Unturned 2’s strong point.

@centerman12346 The advantages of having an MRE is that you’d get 100% fresh food 100% of the time when opening up an MRE. Also, keep the packaged MRE as the two inventory slots it currently is. I’d just find it cool to have MREs give you a random assortment of food stuffs is what I’m saying.

I’m just saying it would be a cool feature, I agree that realism for realism’s sake is stupid. Hell, you could have a certain percent chance of getting glue and explosive gum in an MRE if you really wanted to just for shit’s n’ giggles.

Also, for shit’s n giggles add crayons as an edible item and it would be part of the MRE just like the glue and explosive gum as mentioned before.

Realistically, there shouldn’t be any crayons in the MREs, because the Marines would have eaten them all before the outbreak