With Unturned II being developed from scratch, we now have the opportunity to get vehicles with much more depth than before, meaning that we may have much more options for vehicles, we already know that they will be more interactive, but what if we now have a cool upgrade system? Well I did a concept on how that could work, I hope you enjoy it.

Base vehicle: It looks like we won’t longer have generic looking vehicles, so there is a change for cars to look like real life vehicles, mine is a BMW E34. 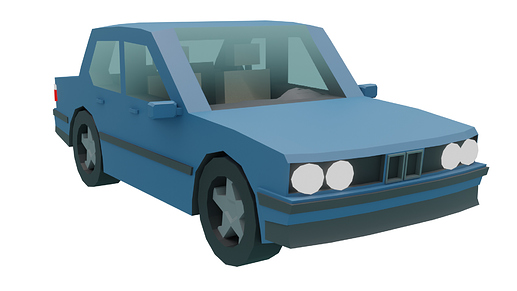 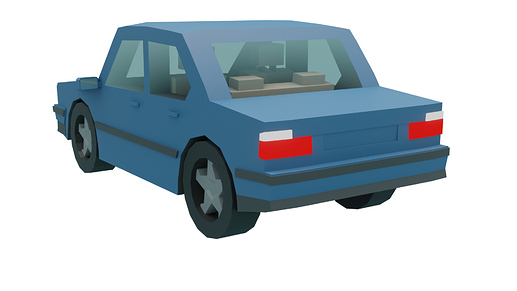 That would be it, thanks if you made it this far, any suggestions? Leave it below!

@Ciitroz
I’m loving the suggestions and concept ideas, I don’t think anyone would vote against such a detailed vehicle system, however I know many people who turned to Unturned since they found other survival games too complicated. My point is that if everything in the game is fully customization it may be too much for some people. Not only this but some features would take a while to implement into many of the upcoming vehicles further pushing back the release of Unturned 2.x.

Apart from this I would really like a feature like that to be in the game since it’s what some of us look for in survival games. (The freedom and creativity you can have when surviving). This would also lead to endless possibilities of ways to survive for example you could take a low armored vehicle with a decent engine to get from one place to another quickly, or you could take an armored variant that is much slower, but has the ability to withstand all kinds of small arms fire and being able to plow through hords with the reinforced front bumper.

Keep up the great work,

I agree on you with everything you said, I’m pretty much a car guy, so I did thinking on what I would like to see, but I think that some cool things can be made without going to complex.

I honestly like the idea. I could tinker with vehicles to get better fuel efficiency, or make it faster, etc. Cool shit bro.

this would be perfect. not too complicated

however I know many people who turned to Unturned since they found other survival games too complicated. My point is that if everything in the game is fully customization it may be too much for some people.

I know you like the posts idea and are bringing up an argument others might bring up, not your own concerns. But I have never seen the point of keeping U2 simple for the sake of it being simple. I think with that mindset you make the game poor for everyone else. Never actually ran into someone who says they play Unturned because its simple.

A good game is fun to pick up and not overly complicated but still having a level of depth to it. That is easier said then done and is often what makes games great. But it seems like a lot of people on the forums are to quick to call out features for being to advanced for U2 when they really are not. I can’t imagine if this is post is possible, that anyone would be against it. Too often people say “oh a mod can do that, don’t have it in the base game” when it seems completely achievable. But a lot of people don’t give a shit about mods and don’t see that as a suitable option.

Obviously if a feature is immensely ridiculous in scale and depth, it will be deemed as so, but something like this only would make the game better. Games in general made for the sake of oversimplification tend to lead exploitable features and don’t have a lot of replay-ability. Screw those people who say “O this is too much customization for me”. Get with it or get to the curb is what I say. People shouldn’t be worried about things being overly complicated for others because their small pee sized brains couldn’t figure it out. Being poorly designed and confusing is one thing, but a in depth system with game knowledge is another, especially one that is optional like car modification.

And to @Ciitroz this was a very clean and well put together post well done good sir. I think the nice format and pictures led to a lot of peoples idea that this is a good idea and not overly complicated, compared to the same idea with mashed texts and no pictures. Would be legendary to see anything like this in U2.

@The_Berrie-Man
The base game itself should be a medium ground between simple and complex, but if mod creators want to add a bit of complexity to the game the breathing room should be allowed to exist to do so. So I see your point, my point is that it would be great for a mod if one were to want to add more complexity, but the game should be a median ground between simple and complex. Not too simple as to make the user bored, but not too complex to cause a high learning curve.

Well done you just contradicted yourself.

I provided both my own opinion as well as a general judgement, both provided critiques and compliments.

People chose Unturned over other survival games such as DayZ and 7DaysToDie due to the art style being easy to run, as well as the simplicity of the game. It’s very easy to learn all the steps to achieve the most enjoyable experience you can, however if you make a game with a shit-load of features making it hard for a new player to learn it all, it will force them to loose interest since they would find the base game too complicated to play.

I never said that what Ciitroz posted wasn’t good for U2, personally I stated that I would love to see something like that in the next game.

This is such a fantastic suggestion,I love it!

It all depends to what audience you are aiming for, I’m hoping for Unturned II to be more “mature oriented”, adding more complexity into stuff, but there is still a limit to how complicated you want the game to be, Project Zomboid is the perfect example of a game that just has too much complexity in it that makes people either love it or hate it. I think that making the game simple for the sake of being simple is actually a thing, that’s why people may prefer Dirt Rally over Art of Rally.

But with what I’ve seen in the devlogs and all that stuff, I think the game will be focused to have much more depth into things compared to Unturned, or at least I hope so.

I never said that what Ciitroz posted wasn’t good for U2, personally I stated that I would love to see something like that in the next game.

mmmm…Never said that either. That’s why I said may not be your concern. Seems your concern was for other peoples concern. But my point was not to hold the game back because “some people” may be to overwhelmed. If people in a community want something they should express their desire for it and not worry about if its to hard for some people to comprehend. Which obviously you do as you stated and a lot of others in the comments.

My concern was all the comments seem positive, but all have the same part on the end of them that say “this is awesome and great for people who don’t want it too complicated”. I am just confused when people want something they are scared others might not.

however if you make a game with a shit-load of features making it hard for a new player to learn it all, it will force them to loose interest since they would find the base game too complicated to play.

This is the main point I disagree on. IMO U2 never runs the risk of being overly complicated with too many things to learn so its not a concern of mine. But in other games I have played games with loads of features are cool and bring more people because its more interesting. This is my opinion with a lot of games, not particularly Unturned. If something is interesting to players they will play it simple. Like I said being poorly designed and confusing is one thing with a lot of head ache and grindy mechanics, but its another to have deep meaningful content.

My point is tho everyone here likes this post. And although we all agree this is a good post. Everyone is trying defend a point coming from a concern no one is bringing up.

My point wasn’t to roast you @Mikey but your comment seemed to sum up what I saw a lot of in the posts and on the forums in general. Someone who is excited for something and wants it, but at the same time defending a group of people (who in my opinion) hold back the potential of the game.

And being someone who has played for 2600 hours I and my friends never played Unturned because it simple. We played it cause its fun and enjoy the world and art style. Back then we did play the game cause we had bad computers but never cause it was simple for simples sake. The main issues that arise in 3.0’s today is because of its overall simple design. In the beginning it wasn’t that apparent but over the years these features has been proven to be very exploitable or easily overlooked, and is the reason I don’t think people play Vanilla all too much today.

But with what I’ve seen in the devlogs and all that stuff, I think the game will be focused to have much more depth into things compared to Unturned, or at least I hope so.

Yep, I hope so as well and it seems to be on that track. I think something like your post fits very well within it.

They chose Unturned because it was free.

And also because it was a game with few requirements.