Unturned Youtubers in a nutshell 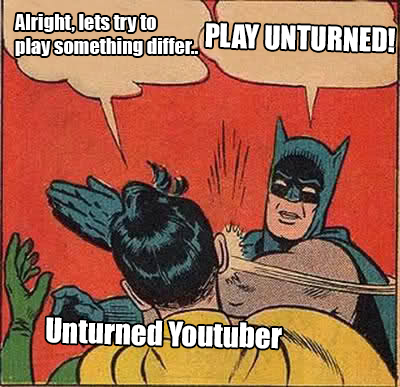 Sad thing is that this is how channels like CaptainSparklez fell off the face of the earth.

Say, P9nda. Are you going to stick with 3, since all the easy raids and stuff are on 3, or are you switching to 4, because…well…base raids are going to be much harder in Unturned II.

I almost hit that mf like button, but then i realized it was P9nda…

get it right m8

Why not the whole entire island of Oahu?

Do you actually think I enjoy the fact that its that easy to raid?
If you would watch even one video you would know how I always complain about
how easy it is to raid and that I wished it was way harder to do so.

Its obviously not hard to raid in current Unturned but have you eveer thought about how
long it takes to find a live raid or even a raid in general? I recently have raided live most times
and I dont have people looking for bases for me like other youtubers have. I do everything by
my own.

on which video did I comment that? I cant even remember anymore

It’s mostly because of the spawn drop rate, and the fact that it’s too easy to craft raiding gear. All you need is a grenade (which is very common), a bunch of raw explosives (which are also very common), and the rest can be found literally anywhere, even from fishing (i.e. glue)
Not to mention that the health on the bases is very poor

Because the rarity in unturned…
When you see a rocket launcher, sure you’ll get stoaked (spelling) at first, but it’ll be very casual due to the loot drop chances being wonky. From a Youtuber’s standpoint, finding a rocket launcher isn’t worth a full video because it’s so common. However, much like The Forest, have a big dark giant cave that would be very difficult to get through, and in the end there’s some secret weapon that wouldbe amazing. Like the Mk II, bit of course, not as powerful, but again, like the Mk II, has only 1 mag and it won’t respawn until [insert specific timeline].
This could be the case for the important loot like grenades and raw explosives but with a significantly simpler cave

So…special weapons that only bosses drop?
Like, I dunno, a fully automatic grenade launcher?

Not necessarily boss drops. It could be hidden somewhere deep in the cave. Something like an MGL with incendiary rounds, or regular rounds. The boss drops some cool things as well, but it should be the search for the item in addition to the fight that makes the weapon worthwhile. It could be my personal opinion, but the cave thing is what i really want to happen. Make it so difficult that it needs at least 3 people with modern guns and good aim to go through. Unlike the current Hulk which takes 1 mag only to be taken care of.

Kameding’s “Rio is next” video

well i mean, theres litterally 3 active unturned youtubers right now and there all bad so i wouldn’t blame them

well i mean, theres litterally 3 active unturned youtubers right now and there all bad so i wouldn’t blame them

@danaby2 take a good look at this boyo