As a longtime Unturned fan who’s back after a bit of a hiatus, I’ve been poking around the official maps quite a bit, with my favorite being Yukon. The uniqueness, unmarked locations, and general “lost” atmosphere of it is so appealing to me. Having some map creation experience myself, I can’t help but feel like it needs to be revisited if there’s any chance people will play it again.

I was wondering what the community thought about the current state of Yukon and want to hear any suggestions you have if there were to be a facelifted/updated version of it.

I’m interested in any feedback on the current state of the map, most notably: terrain, locations, layout, loot tables, and difficulty.

Every once in awhile it gets an update

Nobody is ever going to update it

I like the old constant blizzards because it made Yukon harder, but I do think it is more realistic with the blizzards coming and going. I do think that it would be cool to have an updated version.

I wasn’t planning to reply as to leave the potential community discussion unobstructed, but…

I like the old constant blizzards because it made Yukon harder, but I do think it is more realistic with the blizzards coming and going.

Late last month I briefly spoke with Nelson about replacing the non-snowing periods with a new “gentle snowfall” weather (following up on the recent update to weather), while retaining the harsher blizzards that occur more rarely.

It’s currently on the Unturned roadmap, but I wouldn’t be able to tell you if/when it will end up happening. Lots of stuff we’d like to work on :X

Feel free to carry on with general discussion though

I noticed that feature on the roadmap, I think it’s a fantastic idea.

I really like Yukon so I’m gonna address your points and pitch a bunch of my own ideas.

It’s simple and it worked for what it was made for (constant snowfall which heavily obstructed view past 50 meters), it looks a bit odd when you can see far distances clearly and I’m not really sure how it could be improved.

locations/layout/loot (this all ties together really)

I think the biggest issue with Yukon currrently is the fact that PDW even spawns on the map and the only mags that you can get for it are drums, the map used to be fine with just civilian guns and the best thing you could get was Viper. There’s also couple ways to execute some semblance of progression of acquiring items (be it deadzones, diving equipment or something else) and yet Yukon makes no use of that so that’s definitely an aspect that could be improved.

A long while ago (about 3 years now I think) I made what I called ‘Yukon Remastered’ which was essentially Yukon with heavily tweaked layout, some improved locations and some new ones. Files to that have been lost to time but here’s rough concept. 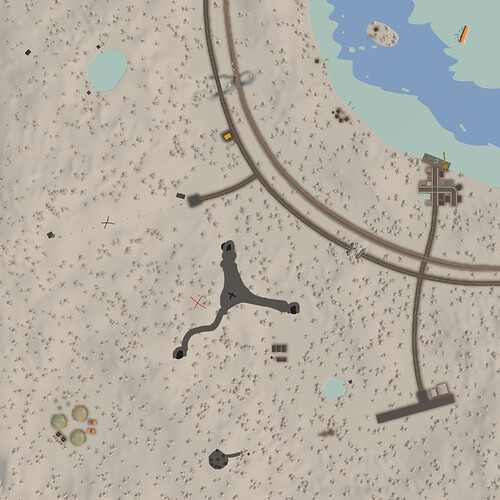 The mine is accessible and has metal nodes.

RCMP outpost/shack whatever is moved towards left top and replaces useless barn, it’s honestly sort of meta spot on Yukon for easy shotguns and it being so easily accessible always bothered me. That general idea of the map is instead replaced with a mountain with a cave system housing some new loot in form of ranger loot (obviously limited to low tier guns such as Kryzkarek and rarely MP40.

Whitehorse gets a crane cause cranes are cool.

Boat area is changed to be mostly water (which during constant snowfall is dealing a lot of damage due to cold) effectively putting bit of a gate on that loot.

Off-Limits could be made into a deadzone although idk where gasmasks could be obtained from/or how crafted.

I’m really passionate about Yukon, it obviously didn’t age well and with all the changes it got I feel like the map just got worse (weather changes and addition of PDW with drums), it was always a nice different experience, maybe purely because of its limited arsenal and low visibility but it was fun to play with that for a change from PEI or Washington.

Yukon has only one Gas

Station, when you start from nothing, you will be hitting it to get a blowtorch. I had some experiences when reaching the location that some arsehole barricated himself in and with a Safezone Radiator, giving me to chance to start for real. Unless of course I kill someone already carrying one in his inventory. But I rarely PVP right away with no skills no warm clothes either.

Then because you cannot craft HBs, a long standing server without wipes makes it super hard to get yourself a chance to make room for yourself, even if you are a very dedicated player who can marathon himself for full hours straight while missing meals.

Yukon is a charm and love it a lot, but I never stayed long as in other maps.

It’s nice to see another who is passionate about this map!
A big concern of mine that you pointed out is the ability to see across the map when the storm stops. By the sounds of it, the “gentle snowfall” feature on the U3 Trello may fix that which is nice. I’ve also messed around with adding some shallow ravines and denser wooded areas, which seems to help LoS issues.

I agree with the PDW and drums, they’re on a tier of their own when put against any of the other weapons you can get on the map. Adding a larger deadzone would be really cool, that’s something I may tinker with. Thanks for the feedback!

I think blowtorches drop from construction loot, thought I could be mistaken. But yes, ideally there would be more than one place for progression items to drop! Thanks for your feedback!